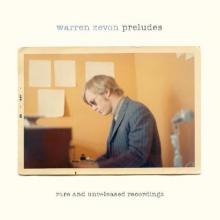 $33.98
SKU: 0607396559015
On Our Shelves Now
Double vinyl LP pressing. Includes booklet. Following Warren Zevon's death in 2003, his son Jordan Zevon discovered 126 unreleased outtakes and demos in a piano-sized touring case. This discovery would be distilled down to the best of these recordings and eventually released as a 2-CD set titled Preludes released on May 1, 2007. When the album was released, it featured sixteen unreleased recordings from Zevon's personal archives, as well as six never-before released songs and a five-part 2000 interview with KGSR's Jody Denberg. This release will be pressed for the first time on black vinyl. This double LP set features all of the exclusive bonus tracks as well as a beautiful 20-page perfect bound book, all packaged in a hardbound slipcase.