Life after a particularly bad night 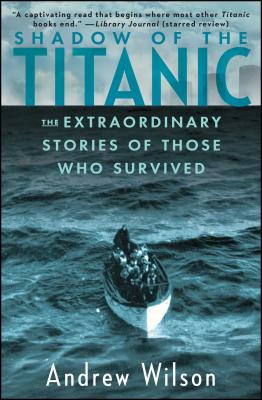 I would rather die a hundred times than go through such an experience and live. -- Thomas Patrick Dillon, crew member RMS Titanic

Among the new books released to coincide with the centennial of the demise of the largest moving object on earth is one by Andrew Wilson called Shadow of the Titanic. Wilson's premise is as elementary as his exposition is persuasive: The survivors of the most momentous shipwreck in history had to go on living with the memory of April 15, 1912 fixed firmly in their minds. It was, to coin a tired phrase, easier said than done for a great many of them. Living with it was difficult, but forgetting it was impossible.

As terrible as the evacuation of the stricken ship may have been and as terrifying as the prospect was to many of being lowered nearly 80 feet into the inky blackness of the North Atlantic, most survivors invariably cite the minutes immediately following the liner's disappearance as the worst part of the ordeal.

No two attempts to describe the wail of human misery that carried across the flat surface of the ocean were quite the same. Some even had trouble associating it with a human sound. People in the lifeboats pulled harder against the oars because it helped to cover the awful noise. Someone suggested singing.

In Boat No. 5, Fifth Officer Harold Lowe was moved to go back and try to pull people out of the 28 degree water. His was the only lifeboat that did. (The most famous, nonexistent man rescued by Boat No. 5 was the possible heir to Downton Abbey.)

In Boat No. 4, the 18-year-old wife of John Jacob Astor had no idea that a stipulation in her very recently-deceased husband's will dictated that she should lose her inheritance if she should ever marry again. And Madeleine Astor wasn't the type of woman who liked to sleep alone.

One of the 12 occupants of Boat No. 1 (capacity 40) claimed that she never heard a sound after the Titanic vanished. It was not a surprising statement given the fact that Lady Duff Gordon's husband was accused of paying crew members in the boat to row away from the cries. The ignoble act and its ensuing notoriety did wonders for her career, although Sir Cosmo tended towards reclusiveness for the rest of his life.

The former Lucy Sutherland, who had transformed herself into one of the world's most celebrated fashion designers -- with a title and an ego to match -- is another of the fascinating people whose lives after the Titanic are traced in Mr. Wilson's informative and wickedly entertaining book. (Oh, come on, everyone loves to read about the trials and tribulations of the filthy rich.)

Whereas How to Survive the Titanic, Frances Wilson's recent biography of J. Bruce Ismay, Chairman of the Board of the White Star Line and, not coincidentally, the ship's least-popular survivor, would probably have more appeal to strict devotees of the tragedy, Shadow of the Titanic, with its immaculately researched  histories of the lives of some of the epic disaster's legendary players, should attract a broader audience. (Mr. Ismay merits only a chapter and, although Andrew Wilson makes a convincing case for Ismay's apparent self-loathing following the loss of his company's grandest achievement, the author's attempt at psychoanalyzing this extremely complex and private man struck me as slick and shallow -- more Dr. Phil than Freudian.)

Shadow is, above all,  a riveting exploration of how different people react to the same traumatic event. Some saw their escape, when so many others died, as a sign to live the rest of their lives to the fullest. Many could never still the screams of the dying or assuage their feelings of guilt because they survived. For others, an isolated incident years later -- hearing a song again that the band might have played while the ship sank -- induced a paralyzing chill. A surprising number of survivors eventually took their own lives.

Mr. Wilson makes it quite clear that no one who lived through the night the Titanic sank escaped completely unscathed. Some scars were just more obvious than others.

Shadow of the Titanic: The Extraordinary Stories of Those Who Survived (Paperback)