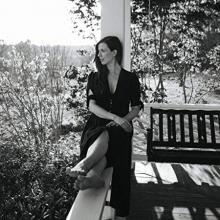 $19.98
SKU: 0644216262311
Vinyl LP pressing. Formerly of four-time Grammy Award-winning folk, country and Americana duo The Civil Wars (from 2009 until 2014), Joy Williams presents her fifth solo full-length album, Front Porch. Produced by Kenneth Pattengale of The Milk Carton Kids and engineered by Matt Ross-Spang, the LP represents a new chapter in Williams' career, who recorded the album in Nashville during the pregnancy of her second child. Already receiving praise, Rolling Stone states the new music, "... is both familiar and new, and explicitly clear that there's nothing missing when she goes it alone." Two songs from the record - "Canary" and "The Trouble With Wanting" - have already been released to critical acclaim. Of "Canary," Rolling Stone proclaims, "As usual, her voice stills the spotlight, with everything building toward Williams' ringing, crystal-clear glory note in each chorus," and the Houston Chronicle furthers, "Williams' vocal on the song reflects the assertiveness of it's subject. A moment in it's refrain finds her reaching high for a note and finding it."Store Subject: FOLK
Release Date: 5/3/2019