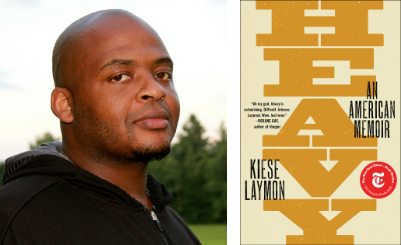 Join us on Friday, March 8th at 7:00 p.m.as Kiese Laymon talks about his new book, Heavy: An American Memoir, a wrenching and provocative memoir about weight, abuse, and race, written with the charged intellect of Ta-Nehisi Coates and the piercing candor of Roxane Gay.

“[Heavy] take[s] on the important work of exposing the damage done to America, especially its black population, by the failure to confront the myths, half-truths, and lies at the foundation of the success stories that the nation worships. In the process, Laymon...dramatize[s] a very different route to victory: the quest to forge a self by speaking hard truths, resisting exploitation, and absorbing with grace the cost of being black in America while struggling to live a life of virtue…You won’t be able to put [this memoir] down, but not because [it is] breezy reading. [It is], in Laymon’s multilayered word, heavy—packed with reminders of how black dreams get skewed and deferred yet are also pregnant with the possibility that a kind of redemption may lie in intimate grappling with black realities.”—The Atlantic

Born and raised in Jackson, Mississippi, Kiese Laymon, Ottilie Schillig Professor of English and Creative Writing at the University of Mississippi, is the author of the novel Long Division and a collection of essays, How to Slowly Kill Yourself and Others in America. He is also the author of the memoir Heavy.