This journalist and historian examines our impact on water and water’s impact on us from the Industrial Revolution to the present day.  Focusing on a stream in New Hampshire and how it has been affected by changes in technology, economics, pollution, new ideas,and human action, Water Connections is a book of sobering lessons and of beauty and passion.

Water is life.  It is central to our survival and is also a part of everything else we do in our everyday lives--building and creating, recreation, cleaning, cooking, generating power, transportation, and more.  But if there is one thing our species is especially good at, it's taking anything that we use every day or have in abundance, for granted.  Jim Rousmaniere's new book Water Connections: What Fresh Water Means to Us, What We Mean to Water, seeks to remind, and further educate, us all on how much water affects our lives and how much we are affecting our water.

This book includes specific stories of contamination and our attempts to bend water to our will in the name of progress, and the resulting disasters. But Rousmaniere focuses just as much on what we still can do as what has been already done, impressing on us that we too, like water, are always changing.

Water Connections focuses on a stream in New Hampshire and how it and other bodies of water have been affected by changes in technology, economic values, new forms of pollution, new ideas about nature and the occasionally unintended consequences of human action. The time period is from the industrial revolution to the present day. The geographic scope is largely New England but also includes recent experiences in other parts of the United States and the world.  The book is as much about people as it is water with stories about conservationists, artists, reservoir managers, government officials, water power people, fishermen, scientists and ordinary citizens around water.

Journalist and historian Jim Rousmaniere spent six years studying human interactions with water—past and present—to produce an authoritative report on what water means to us and what we mean to water. His book takes in our changing ways around water power, floods and flood control, water pollution and water treatment, watershed protection and water technology. After graduating from Harvard, Jim surveyed irrigation canals In southern India as a Peace Corps volunteer and then began a 43-Year Career in journalism. He reported on economics in The Washington Bureau of The Baltimore Sun before being named editor and president of The Keene (NH) Sentinel from which he is now retired. He lives in Roxbury, New Hampshire with his wife, a holistic nutrition counselor, and is the father of three daughters and one granddaughter. He is active in town governance and community affairs. 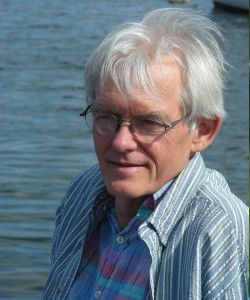 Water Connections: What Fresh Water Means to Us, What We Mean to Water (Paperback)