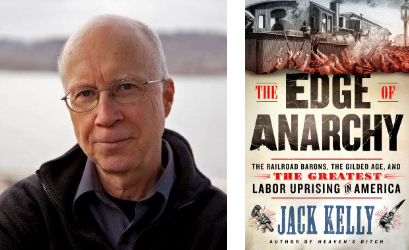 Join us on Friday, January 11th at 6:00 p.m.as Northshire bookseller favorite Jack Kelly talks about his new book, The Edge of Anarchy: The Railroad Barons, The Gilded Age, and the Greatest Labor Uprising in America.

The Edge of Anarchy offers a vivid account of the greatest uprising of working people in American history. At the pinnacle of the Gilded Age, a boycott of Pullman sleeping cars by hundreds of thousands of railroad employees brought commerce to a standstill across much of the country. Famine threatened, riots broke out along the rail lines. Soon the U.S. Army was on the march and gunfire rang from the streets of major cities.

Many of the themes of The Edge of Anarchy could be taken from today’s headlines—upheaval in America’s industrial heartland, wage stagnation, breakneck technological change, and festering conflict over race, immigration, and inequality. With the country now in a New Gilded Age, this look back at the violent conflict of an earlier era offers illuminating perspectives along with a breathtaking story of a nation on the edge.

Jack Kelly is a journalist, novelist, and historian, whose books include Band of Giants, which received the DAR's History Award Medal, and Heaven's Ditch. He has contributed to The Wall Street Journal, and other national periodicals, and is a New York Foundation for the Arts fellow. He has appeared on The History Channel and been interviewed on National Public Radio. He lives in New York's Hudson Valley.

The Edge of Anarchy: The Railroad Barons, the Gilded Age, and the Greatest Labor Uprising in America (Hardcover)