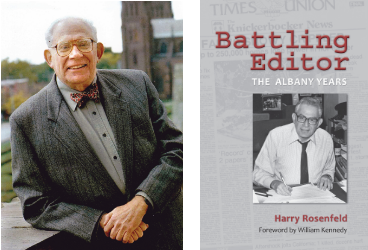 Join us on this event's new date, Sunday, March 24th at 4:00 p.m. as Harry Rosenfeld reads and discusses his book Battling Editor: The Albany Years. In this book he recounts the transformation of two daily newspapers in the face of economic downturns and sweeping technological change.

“Harry’s book is often about tough decisions, and it stands out as a handbook on how to live an ethical life in the news business right now. Is it possible to tell the truth all the time? Sometimes. But this is an instructive narrative—especially today when the truth is such a rare commodity in the White House and Congress, and the financially beleaguered press is itself under threat as an enemy of the people. Harry and his family lived in Nazi Germany, and escaped it in 1939. A large part of his subsequent life has been an ongoing war against fascism, racism, and political criminals. This book explains how he waged that war on a daily basis in the newsrooms he managed so well, and for so long.” — from the Foreword by William Kennedy

Harry Rosenfeld’s award-winning book, From Kristallnacht to Watergate: Memoirs of a Newspaperman, was praised by Tom Brokaw as “a great American story…the inspiring saga of Harry Rosenfeld, arriving as a refugee and rising to the inner circle of journalists who uncovered the greatest scandal in the history of the Presidency.” Rosenfeld lives in Albany, New York, where he is Editor-at-Large and a consultant at the Times Union, and also a member of the newspaper’s editorial board.