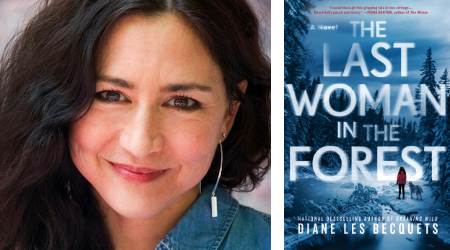 Join us at Northshire for a free event with New Hampshire author Diane les Becquets as she presents her new novel, The Last Woman in the Forest--a riveting and haunting thriller about a woman who fears that the greatest threat to her survival could be the man she loves.

Diane Les Becquets is back with The Last Woman in the Forest, a thriller about a woman who fears that the man she loved may have been a serial killer. Combining her love of nature and wildlife conservation, her personal horrific experience with assault, and her interest in the real-life unsolved Connecticut River Murders of the 1980s, Les Becquets has delivered a novel of suspense that will haunt readers until the last page.

Les Becquets was once married to a forester who told her about the Connecticut River Murders of the 1980s: at least six women were stabbed and killed along the Vermont and New Hampshire border.  The killer was never found. The stories of these women affected the author as she remembered her own assault: being held at knifepoint for 12 hours in a trailer when she was eighteen, an ordeal she narrowly escaped from with her life.  One harrowing scene is based on this very personal experience.

In The Last Woman in the Forest, Marian Engström has found her true calling: working with rescue dogs to help track and protect endangered wildlife. Her first assignment takes her to northern Alberta, where she falls in love with her mentor, the daring and brilliant Tate. But after a tragic accident leaves him dead, Marian discovers growing and disturbing inconsistencies about Tate’s life.  She begins to wonder if the man she loved could have been responsible for the unsolved murders of at least four women.  Desperately hoping to clear Tate’s name as a serial killer, she reaches out to a retired forensic profiler who is still haunted by the open cases. As she circles ever closer to the truth with his help, she cannot shake the feeling that she is being watched and that danger lurks around every corner of the forest.

Set in the wilderness landscapes of Alberta, Montana, Idaho, Utah, and northeastern Washington, The Last Woman in the Forest is not just a thriller about one woman’s quest to find a serial killer, but a portrait the realities of the North American wilderness, and a glimpse into the lives of the men and women—along with their trained rescue dogs—that work every day to preserve it

Diane Les Becquets, a former professor of English and MFA director, is an avid outdoorswoman, enjoying backpacking off the grid, snowshoeing, archery, and swimming. A native of Nashville, she spent almost fourteen years living in a small Colorado ranching town before moving to New Hampshire. Breaking Wild, her debut novel, was an Indie Next pick.

The Last Woman in the Forest (Hardcover)