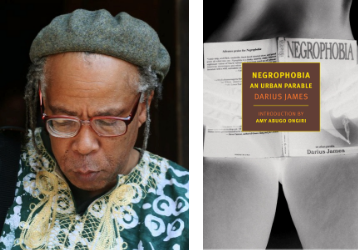 We are thrilled to welcome Darius James to Manchester as he presents a classic novel finally back in print!  Negrophobia is a wild-eyed reckoning with the mutating insanity of American racism. A screenplay for the mind, a performance on the page, a work of poetry, a mad mix of genres and styles, a scabrous, unapologetically raunchy, truly hilarious, and deeply scary novel like no other.

For this free event, Darius will be in conversation with Pam Breaux the president and CEO of the National Assembly of State Arts Agencies.

A provocative, raucous dark comedy about race and racism in America, now back in print after twenty-five years and with a new preface by the author. A novel in the tradition of William S. Burroughs and Ishmael Reed, Negrophobia begins with the blonde bombshell Bubbles Brazil succumbing to a voodoo spell and entering the inner darkness of her own shiny being. Here crackheads parade in the guise of Muppets, Muslims beat conga drums, Negroes have numbers for names, and H. Rap Remus demands the total and instantaneous extermination of the white race through spontaneous combustion. By the end of it all, after going on a weird trip for the ages, Bubbles herself is strangely transformed.

Darius James (b. 1954) is a writer and spoken-word performance artist. He is also the author of That’s Blaxploitation!: Roots of the Baadasssss ’Tude (Rated X by an All-Whyte Jury); Voodoo Stew; and Froggie Chocolate’s Christmas Eve. His writing has appeared in multiple publications, including The Village Voice, Vibe, and Spin, and he is the co-writer and narrator of the 2012 film The United States of Hoodoo. He lives in Connecticut.

"Comic, manic, and amazing, [Negrophobia] tells more about American race relations than all of the walking dead suburban experts, academics, and think tank whores who tell their fellow suburbanites about how it feels to be black." —Ishmael Reed

“Luridly funny and unsparingly smart, Negrophobia is American arcana of the highest order. And like all truly cool books, destined to forever be ahead of its time.” —Paul Beatty

This feverish nightmare of racism is finally back in print after 25 years. Wickedly hilarious, raunchy, vile, and terrifying, Negrophobia is written as a screenplay whose racist protagonist Bubbles Brazil descends into a hallucinatory drug- and voodoo-induced phantasmagoria of black stereotypes. In just one sequence, Nazi-outfitted Disney characters celebrate the Last Supper with a plasticine Jesus as a skyscraper-sized African-American nose devised by the Zombie Master (and his trusted sidekicks Zombie Elvis and JFK’s head on spider legs) destroys the festivities! — Reviewed by Dafydd Wood