Welcome this YA novelist to Northshire as he talks books, writing, and his latest novel about parallel time lines where he explores how our choices can change and shape us—as well as the ways in which choices don’t change the core of our being at all.

Join us for an entertaining and informative evening with young adult novelist Chris Tebbetts when he discusses his new book, Me, Myself, and Him, how he became a writer, the writer's life, inspiring books, the writing process, and what it's like working and writing with James Patterson.

Chris Tebbetts' newest novel Me Myself, and Him is perfect for fans of Becky Albertalli's Simon vs. the Homo Sapiens Agenda and A. S. King's Still Life with Tornado, this story of parallel time lines cleverly explores how our choices can change and shape us--as well as the ways in which choices don't change the core of our being at all.

When Chris Schweitzer takes a hit of whippets and passes out face first on the cement, his nose isn't the only thing that changes forever. Instead of staying home with his friends for the last summer after high school, he's shipped off to live with his famous physicist but royal jerk of a father to prove he can "play by the rules" before Dad will pay for college.

In an alternate time line, Chris's parents remain blissfully ignorant about the accident, and life at home goes back to normal--until it doesn't. A new spark between his two best (straight) friends quickly turns Chris into a (gay) third wheel, and even worse, the truth about the whippets incident starts to unravel. As his summer explodes into a million messy pieces, Chris wonders how else things might have gone. Is it possible to be jealous of another version of yourself in an alternate reality that doesn't even exist?

With musings on fate, religion, parallel universes, and the best way to eat a cinnamon roll, Me Myself & Him examines how what we consider to be true is really just one part of the much (much) bigger picture.

"Wildly ingenious,...altogether, the novel's a winner in this and any other universe."-Booklist, Starred Review

Chris Tebbetts is the New York Times bestselling coauthor of James Patterson's Middle School series. Originally from Yellow Springs, Ohio, Tebbetts is a graduate of Northwestern University. He lives and writes in Vermont. Find him online at christebbetts.com and on Twitter at @christebbetts. 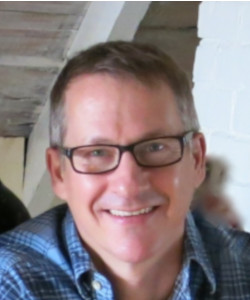 Me Myself & Him (Hardcover)