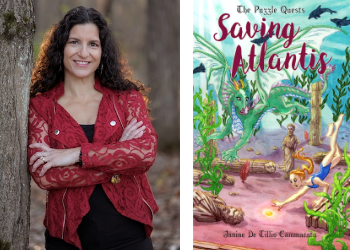 Children's book author Janine De Tillio Cammarata will present a special writing activity for kid readers & writers on Saturday, February 16th at 1:00 p.m.  She is the author of The Puzzle Quests: Saving Atlantis.  Saving Atlantis is the second book in The Puzzle Quests’ series of adventures that span across time and generations.

About The Puzzle Quests: Saving Atlantis:
Rose can’t imagine swimming in the state championships without her teammate Luke. It’s been two months since she had to say goodbye to him in the land of Dragonia, and Rose fears she has lost her connection to him. Before she loses all hope, Rose and her growing band of knights are summoned to Dragonia to fulfill a quest. They must work together to save the mermaid, Natalia, before her home in Atlantis is destroyed.

This perilous adventure tests Rose’s courage and fighting skills as she is lulled by mystical sirens and attacked by unknown enemies. When Rose becomes impatient and attempts to save this fragile world on her own, her team is thrown into danger. The safety of Atlantis and her friendships are compromised. Will Rose see the value of working as a team before she is trapped in Dragonia forever?

Janine De Tillio Cammarata is a graduate of the College of Saint Rose (’88, ’93) in English Literature with a concentration in Medieval Literature. She is the award winning author of What Makes Them Amazing: Inspiring Stories of Young Adults Fighting Cancer.  Cammarata is a member of The Society of Children’s Book Writers & Illustrators. She teaches creative writing and journaling workshops to all ages from elementary school, middle grade, high school, and adults.

As president and co-founder of Nick’s Fight to be Healed Foundation, Inc. Janine spends much of her time running this foundation that is very close to her heart. It was formed in memory of her son, Nick, who passed away from Leukemia in October 2008. Nick’s Fight to be Healed Foundation financially and emotionally supports local pediatric cancer patients, as well as the young adult cancer community. Nick’s Round Table is a teen advisory group which helps other teens during their cancer journey.