Half In: A Coming-of-Age Memoir of Forbidden Love (Paperback) 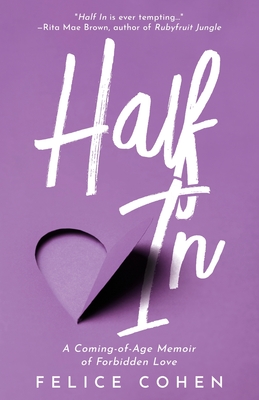 What if your first love was a forbidden one?

At twenty-three, Felice Cohen was, like other recent college grads, hesitant about entering the real world, with the added stress of coming out in the early nineties. Focused on how to land a full-time position as a writer, falling in love was the last thing on her mind.

But fall in love she did. With her boss, a woman thirty-four years older.

Felice and Sarah embarked on a high-stakes, year-long love affair. Addicted to the high of first love, Felice was enthralled by Sarah's attention and content to hide their love in the shadows. Sarah, meanwhile, threw caution to the wind, risking her comfortably established life that included a prestigious job and long-term girlfriend. Though not perfect, it was enough.

That was until their secret was exposed, forcing Felice to publicly acknowledge their illicit love or start a new life for herself. Felice chose to walk away.

In this candid coming-of-age memoir-as compelling as a novel-Felice chronicles the happiness and heartbreak of an age-gap love affair while struggling to figure out the direction of her future. Ultimately, this is a story about navigating life's unpredictable path while following one's heart, and finding acceptance.

Felice Cohen, known nationally and internationally as the woman who lived in one of the world’s smallest apartments, is a speaker, Holocaust educator and author of Half In: A Coming-of-Age Memoir of Forbidden Love. Felice’s previous book, 90 Lessons for Living Large in 90 Square Feet (...or More), the recipient of numerous self-help book awards, was inspired by the YouTube video of her 90-square-foot New York City studio that went viral with over 25 million views. Felice has been featured on Good Morning America, NBC, CBS, NPR, Time, Globe & Mail, New York Daily News, the Daily Mail and more. What enabled Felice to “live large” in that tiny studio is that she has been a professional organizer for over 25 years. As the grandchild of two Holocaust survivors, Felice is also the author of What Papa Told Me, a memoir about her grandfather’s life before, during and after the war. The book has been endorsed by Elie Wiesel and Yad Vashem in Israel, is taught in schools across the country, has been translated into Polish, and has sold around the world. Felice splits her time between New York City and Cape Cod, MA.