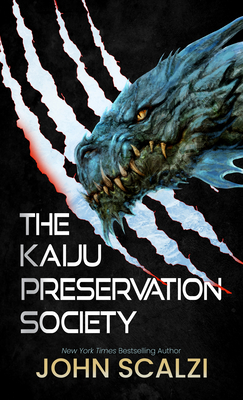 Hilarious. Jamie Gray is trying to survive Covid as a fast food delivery driver when he gets an offer to work for KPS (Kaiju Preservation Society), an animal rights activist group that works with "large animals". If Jamie had remembered that Kaiju is the Japanese name for monsters like Godzilla he would have realized he was not going to be working with bears or elephants. The shock of learning that Godzilla was real and that he would be working in an alternate Earth is a funny and enjoyable ride. This is not a big complex book; as the author says in the afterword "It's a pop song. It's meant to be light and catchy". The book reminds me of Scalzi's Redshirts; his poke at Star Trek.

This hilarious science fiction novel is a delightful confection. After losing his job during Covid, Jamie winds up as a grunt for a mysterious NGO - that turns out to be based on an alternate version of earth, with a mission to protect giant nuclear monsters. I laughed out loud more than once as I read. — Rachel Person

If you have been looking for a book you won't be able to put down, look no further. When Jaime Gray loses his corporate job right at the start of the pandemic he’s stuck working as a delivery driver, barely making ends meet. But when he delivers food to an old acquaintance who offers him a job specializing in “large animals,” it will change his life forever. This long-awaited sci fi reads like a summer blockbuster, but as humorous as your favorite comedy special. This is the story of mountain-sized monsters, snarky scientists, and the efforts to study a world so much like our own, but so vastly different. — Jordan Starks

“I giggle-snorted my way through this, then watched all of my favorite kaiju movies. This book will make you laugh in public and feed the hope that kaiju are secretly hiding somewhere (in an alternate dimension?!). This book is glorious!”
— Annie Carl, The Neverending Bookshop, Edmonds, WA

When COVID-19 sweeps through New York City, Jamie Gray is stuck as a dead-end driver for food delivery apps. That is, until Jamie makes a delivery to an old acquaintance, Tom, who works at what he calls "an animal rights organization." Tom's team needs a last-minute grunt to handle things on their next field visit. Jamie, eager to do anything, immediately signs on. What Tom doesn't tell Jamie is that the animals his team cares for are not here on Earth. Not our Earth, at least. In an alternate dimension, massive dinosaur-like creatures named Kaiju roam a warm, human-free world. They're the universe's largest and most dangerous panda and they're in trouble. It's not just the Kaiju Preservation Society who have found their way to the alternate world. Others have, too. And their carelessness could cause millions back on our Earth to die.

JOHN SCALZI is one of the most popular SF authors to emerge in the last decade. His debut, Old Man's War, won him the John W. Campbell Award for Best New Writer. His New York Times bestsellers include The Last Colony, Fuzzy Nation, Redshirts (which won the 2013 Hugo Award for Best Novel), and 2020's The Last Emperox. Material from his blog, Whatever, has earned him two other Hugo Awards. He lives in Ohio with his wife and daughter