Faster Than Light Propulsion via the Zeno Effect (Paperback) 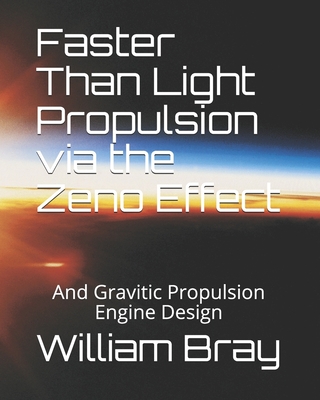 This text is a compilation of two papers published in 2020 and 2021, based on past work on Gravitic Propulsion published in 2010. However, these are far more comprehensive:1.Artificial Alteration of Spatial Geometry via the Quantum Zeno Effect: W. J. Bray DOI: 10.13140/RG.2.2.13527.296012.Superluminal Propulsion via the Zeno Effect: W Bray DOI: 10.13140/RG.2.2.28575.48809The Type II engine described in text I is a subluminal, simple gravitic engine description and associated theory. This text will describe the superluminal 'propulsion' system using the same fundamental Zeno Effect approach to alteration of spatial geometry. The Type I superluminal] engine uses a modified, corrected, and quantized Alcubierre metric in a Phased Array approach as both emitting and detecting large populations of particle events over a large volume of space. The basic premise is to create a volume filling population of, in the examples laid out in this text, beta particles as the observed natural clock system r]. Many different natural clock systems could be used but for practicality's sake this will limit the argument to a population of beta particles. The particles are observed via a detection array herein R]. By large volume, we use the visual metaphor of a sphere perhaps 10-meters in radius in the fundamental description. The particles' paths are controlled by two nacelles, labeled Phased Array I and II. PAI directs the path of the particles into a volumetric sphere, via a Near Field Effect, while PAII uses a Near Field Effect to 'wiggle' or undulate the particles as they progress outward from the 'Particle Fountain, ' high luminosity beta source]. The 'wiggling' beta particles produce magneto-bremsstrahlung radiation, which is detected via the detector array also housed in PAI and II. The particles are repeatedly interrogated, non-destructively, which provides a more robust Zeno Effect. Both Type I superluminal] and Type II subluminal] have no regard for mass nor mass-energy, with respect to the amount of mass they move or accelerate. The spatial geometry curvature is many orders of magnitude greater than, for example, a solar mass, albeit highly localized as a Surface phenomenon Type II subluminal], in this Type I superluminal] engine, a volumetric effect. There is also no energy requirement, energy and mass-energy are a complete non-sequitur in the artificial alteration of spatial geometries via the Zeno Effect. Meaning explicitly, the notion that 'negative energy' via 'exotic matter' is non sequitur, there is zero energy, zero mass-energy required to manipulate the progression of unitary time, via the Zeno Effect, only observation, thus, zero energy associated with artificial manipulation of spatial geometry. FTL requires no mass-energy to achieve.