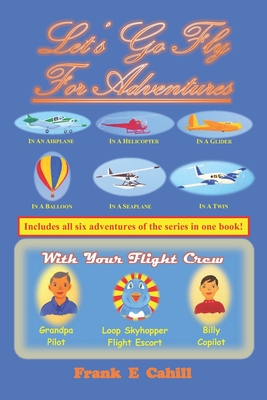 LET'S GO FLY FOR ADVENTURES is a composite of the entire LET'S GO FLY series of six picture books that follows the aviation adventures of a boy and his Grandpa. For children aged two and older, the series tells the adventures of Billy and Grandpa in an airplane, a helicopter, a glider, a hot air balloon, a seaplane, and a twin-engine airplane. Grandpa is the pilot, and he explains the art of flying to Billy, and he often gives his grandson copilot duties. They are joined by a colorful cartoon bird named Loop Skyhopper who acts as a guide, helps with explaining the details of each story, and adds to the fun from a bird's point of view. Each story is told in twenty-two colorful panels that will spark the curiosity and imagination of eager young pilots. Every adventure is included in this edition, or each individual story in the series can be obtained as stand-alone copies. LET'S GO FLY AN AIRPLANE is the first book in the adventure series. It follows Billy and Grandpa as they inspect the airplane together. Billy discovers wonderful things like wings, a propeller, a rudder, and all kinds of gages and radios. After the thrill of lift off, Billy discovers the fun of seeing his town from the air. Later they see fishermen on the river, and then fly in circles over Billy's house where his Mom waves to them from below. LET'S GO FLY A HELICOPTER is the second book in the series. Upon lift off, Grandpa and Billy stand still in a hover, and then Grandpa shows him how to fly forward, backward, sideways, and spin in circles. Later, they fly low over the trees and town, and then Grandpa takes them to Billy's home where his Mom waves to them as they hover outside. LET'S GO FLY A GLIDER is the third book in the series. Billy discovers that gliders have very long wings to help them stay in the air longer. After they reach the proper altitude, Grandpa and Billy release from the tow plane, and soon encounter strong lift that carries them so high they soar with a falcon and another sailplane. And they go even higher where they find cool air and see the dark blue color of the sky at high altitude. LET'S GO FLY A BALLOON is the fourth book in the series. Billy gets to go inside the balloon while he and Grandpa join the ground crew in filling the balloon and preparing it for launch. Drifting along with the wind, Billy chats with a boy on the ground, and he is thrilled when they drop down to a few inches above the surface of a lake. Later, he is excited when he spots a herd of deer scampering into the woods. There is more fun when they coast over a river bridge, and he is thrilled when they climb to a dizzying height above the clouds. LET'S GO FLY A SEAPLANE is the fifth book in the series. Billy and Grandpa inspect a floatplane from the dock of a seaplane base. With the windows open they scoot across the water in an exciting launch. Once airborne, the explorers decide to land on a river, where they see men fishing from the pontoons of another seaplane. The river is a tight spot for their next takeoff, so Grandpa lifts off on one float for a quicker takeoff, and then he steers them under a bridge on the rousing climb out. LET'S GO FLY A TWIN is the sixth book in the series. Grandpa is planning to use a twin-engine airplane for a business trip and invites Billy to come, too. Billy learns the speedy twin has retractable landing gear, and computerized flight instruments. On their way to the next town, Billy combines sightseeing with his copilot duties. He admires the clouds as they fly high over them for better speed, and he sees a train crossing a trestle far below them. It looks like a toy train.