The Great Escape: A True Story of Forced Labor and Immigrant Dreams in America (Compact Disc) 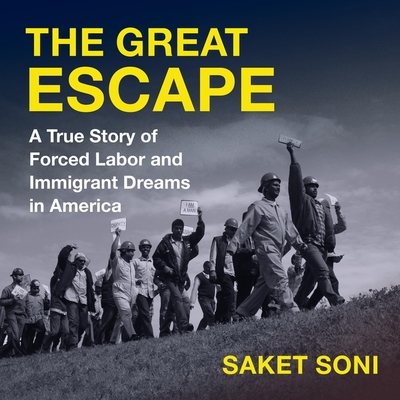 An eye-opening, true-life narrative that exposes our treatment of immigrants and the fallout from globalization, this is the astonishing inside story of five hundred foreign workers from India entrapped in the largest human trafficking case in modern American history--and their heroic journey for justice.American Promise is the gripping true story of a group of immigrants entrapped in the largest human trafficking scheme in modern American history, told by the visionary young labor leader who blew the scam apart. Weaving a deeply personal journey with a riveting tale of 21st-century forced labor, Saket Soni takes us into the hidden lives of the foreign workers the US increasingly relies on to rebuild after climate disasters. Soni was a 28-year-old labor organizer in post-Katrina New Orleans when he uncovered a conspiracy by a Mississippi sheriff, an oil industry CEO, and a liberal lawyer to innovate human trafficking in 2007. The conspirators lured 500 Indian men to the US with promises of good work and green cards, then subjected them to round-the-clock work and abuse in squalid "man camps" in Mississippi and Texas, trapping them "as surely as if they were shackled," as the New York Times wrote. In a propulsive narrative, Soni introduces us to the men and tells of their extraordinary escape from captivity, their freedom march on foot from New Orleans to Washington, D.C., and their 31-day long hunger strike to bring attention to their case. American Promise reveals their struggle for justice through the halls of Congress, even as they are pursued by corrupt ICE agents in cahoots with the American corporation that enslaved the men. With company officials and the federal government determined to silence them, the workers fight to win recognition, reunite with their families, and become US citizens. Along the way, Soni grapples with his own identity as an immigrant in search of a home.