Servants of the Damned: Giant Law Firms, Donald Trump, and the Corruption of Justice (Compact Disc) 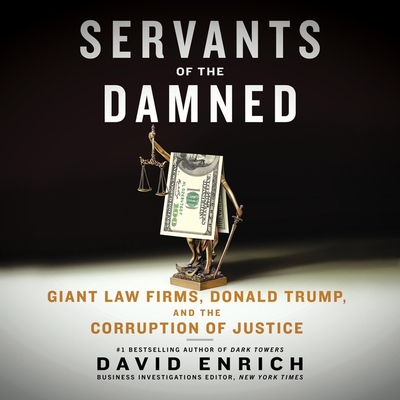 From the New York Times's Business Investigations Editor and #1 bestselling author of Dark Towers comes a long-overdue expos of the astonishing yet shadowy power wielded by the world's largest law firms, following the narrative arc of Jones Day, the firm that represented the Trump campaign and much of the Fortune 500, as a powerful encapsulation of the changes that have swept the legal industry in recent decades.

In his acclaimed #1 bestseller Dark Towers, David Enrich presented the never-before-told saga of how Deutsche Bank became the global face of financial recklessness and criminality. Now Enrich turns his eye towards the world of Big Law and the nearly unchecked influence these firms wield to shield the wealthy and powerful--and bury their secrets. To tell this story, Enrich focuses on Jones Day, one of the world's largest law firms. Jones Day's narrative arc--founded in Cleveland in 1893, it became the first law firm to expand nationally and is now a global juggernaut with deep ties to corporate interests and conservative politics--is a powerful encapsulation of the changes that have swept the legal industry in recent decades.

Since 2016, Jones Day has been in the spotlight for representing Donald Trump and his campaigns (and now his PACs)--and for the fleet of Jones Day attorneys who joined his administration, including White House Counsel Don McGahn. Jones Day helped Trump fend off the Mueller investigation and challenged Obamacare. Its once and future lawyers defended Trump's Muslim ban and border policies and handled his judicial nominations. Jones Day even laid some of the legal groundwork for Trump to challenge the legitimacy of the 2020 election.

But the Trump work is but one chapter in the firm's checkered history. Jones Day, like many of its peers, have become highly effective enablers of the business world's worst misbehavior. The firm has for decades represented Big Tobacco in its fight to avoid liability for its products. Jones Day worked tirelessly for the Catholic Church as it tried to minimize its sexual-abuse scandals. And for Purdue Pharma, the maker of OxyContin, as it sought to protect its right to make and market its dangerously addictive drug. And for Fox News as it waged war against employees who were the victims of sexual harassment and retaliation. And for Russian oligarchs as their companies sought to expand internationally.

In this gripping and revealing new work of narrative nonfiction, Enrich makes the compelling central argument that law firms like Jones Day play a crucial yet largely hidden role in enabling and protecting powerful bad actors in our society, housing their darkest secrets, and earning billions in revenue for themselves.