The Girl in the Middle: Growing Up Between Black and White, Rich and Poor (MP3 CD) 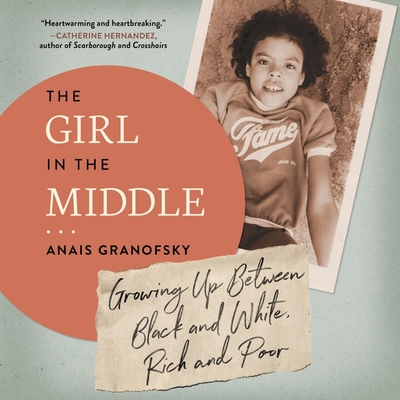 In this poignant and timely memoir--written with the searing power of Beautiful Struggle and Born a Crime--Degrassi Junior High star Anais Granofsky contemplates the lingering impact of a childhood spent in two opposite and warring worlds.

Though recognized around the world for her role as Lucy Hernandez on the hit show Degrassi, Anais Granofsky's true childhood story is largely unknown. Growing up, Anais was caught between two vastly different worlds: her father, Stanley, came from a wealthy, prominent, white Jewish family in Toronto. Her mother, Jean, was one of fifteen children from a poor Black Methodist family in Ohio directly descended from freed Randolph slaves. When Anais's parents met at Antioch College in the early 1970s and soon had their first child, they didn't anticipate being cut off by the wealthy Granofskys, or that Stanley would find his calling in the spiritual teaching of Bhagwan Shree Rajneesh, change his name to Fakeer, and leave his family for an ashram in India.

Young Anais and her mother teetered on the abyss of poverty, sharing a mattress in a single room in social housing in Toronto, while her grandparents lived in a mansion that was twenty minutes away. As Anais grew up, she spent weekends with her wealthy Granofsky grandparents. On Saturdays and Sundays she would wear expensive clothes and eat lunch by the pool. In the weeks between, she and her mother lived day by day penniless, rarely knowing where their next meal would come from. From her earliest youth, Anais realized that if she wanted to be loved, she had to keep her two lives separate, learning to code switch between her Jewish identity on the weekend and her Black one during the week.

Her life was compartmentalized, until at age twelve, Anais was cast in the internationally successful television show Degrassi Junior High.

The Girl in the Middle is a tale of two vastly different families and the granddaughter they shared and clashed over. Compassionate and vivid, Anais's story is a powerful lens revealing two divided families and the systematic, generational oppression that separated them. As Anais shares her experiences growing up in opposing worlds, she offers a heart-wrenching exploration of generational trauma, love, shame, grief, and prejudice--and essential insight for healing and acceptance.