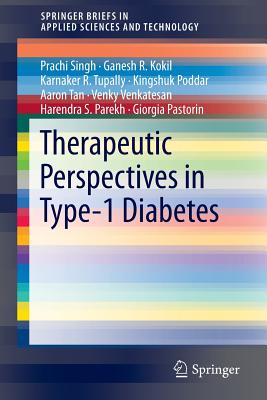 This book provides critical insights into and appraisals of recent breakthroughs in type 1 diabetes modulation, with a particular emphasis on the potential impact of current prevention and treatment strategies. It also discusses recent successes and failures in clinical trials. Presenting an comprehensive overview of the disease, it is especially useful for newcomers in the field. It also includes illustrations, which make it easy for the reader to grasp the basic concepts involved. Furthermore, the tables include concise and easy-to-understand information on current clinical trials.

Prachi Singh received her 1st MSc degree in Industrial and Pharmaceutical Sciences from ETH (Zurich) in 2010 and 2nd MSc (research) in Pharmaceutical Science and Technology from National University of Singapore in 2014, working on Dendrimers for drug delivery in type II diabetes.During the period of 2007-2015, she held several positions such as (i) analytical R&D trainee in Novartis AG, Basel, (ii) occupational trainee at the Pharmacy Australian Centre of Excellence, University of Queensland. She is currently a Research Associate at Nanyang Technological University (Singapore) in School of Biological Science. Her research interests focus in Drug delivery and Analytical Biochemistry. Currently she is working on a relatively new potential technology named Weak Affinity Chromatography in fragment-based screening. Ganesh R. Kokil is currently pursuing his PhD degree at the School of Pharmacy, Pharmacy Australia Centre of Excellence, The University of Queensland, Brisbane, Australia, under the supervision of Dr. Harendra S Parekh (medicinal/formulation chemist), Dr. Rakesh N. Veedu (nucleic acid biologist) and Prof. Grant A. Ramm (liver expert). He obtained his pharmacy degree from Shivaji University, India (2004) and Master's in pharmaceutical chemistry from Bharati Vidyapeeth University, India (2007). He is a recipient of the prestigious GATE (Graduate Aptitude Test in Engineering) fellowship for Master's (2005-2007) and University of Queensland International Scholarship for pursuing his PhD studies (2012 to 2015). His areas of research interest include designing, developing, and delivering modified nucleic acid-based therapeutics against type 2 diabetes mellitus with 14 international peer-reviewed publications to his credit. Karnaker R. Tupally is currently pursuing his PhD degree at the School of Pharmacy, Pharmacy Australia Centre of Excellence, The University of Queensland, Brisbane, Australia, under the supervision of Dr. Harendra S Parekh (medicinal/formulation chemist), Dr. Defang Ouyang (formulation/computational chemist). He obtained his pharmacy degree from Kakatiya University, India (2008) and Master's in pharmaceutical analysis & quality assurance from Jawaharlal Nehru technological university, India (2011). He is a recipient of University of Queensland International Scholarship for pursuing his PhD studies (2012 to 2015). Karnaker research involves engineering novel disulfide-contained building blocks for therapeutic applications such as bioreducible peptide dendrimers for gene/drug delivery, design and development of disulfide-bridged therapeutic peptides, molecular dynamic for carrier drug interaction and also exploring other exciting opportunities to use of stable disulfide bridges for labelling biomolecules and drug-conjugates. Aaron Tan is a clinical medical student at University College London (UCL), in the MBBS/PhD clinician-scientist training programme. He obtained both his integrated BSc in Surgical Sciences, and his PhD in Surgery & Bioengineering from UCL. He is also concurrently a visiting scholar at the Biomaterials & Advanced Drug Delivery Laboratory (BioADD) at Stanford University. He has published in excess of 35 peer-reviewed scientific articles and has an h-index of 13. His research interests are in the field of material sciences, bioengineering, and plastic surgery. Prof. Venkatesan has been a Physicist and manager for 17 years with Bell Labs and Bellcore and in the last 17 years has been with the Center for Superconductivity Research at University of Maryland, College Park. He founded the Surface Center at Rutgers University where he was a Professor for about five years (85-90). Most recently he was leading an effort in Oxide Electronics at UMD. Since 2008 he is directing the NanoCore Research Center at the National University of Singapore. He pioneered the Pulsed Laser deposition process and was the first to elucidate the intricacies of the process to make this a reproducible laboratory technique for the growth of high quality multi-component oxide thin films. He is an ISI highly cited Physicist (>20,000 citations ranked 66) has over 450 papers and 27 patents in the area of oxides involving superconductors, magnetic and optical materials. He is a Fellow of the American Physical society, World Innovation Forum, winner of the Bellcore award of excellence and the UMD graduate Board award. He was a member of the Physics Policy Committee and is the founding member of the International Oxide Electronics Workshop. He holds a PhD from the University of New York and Bell Laboratories, USA and an MSc and a BSc (Honors) from the Indian Institute of Technology in Kanpur, India. His research group is one of the leading ones in the field of Oxide based Thin films. A new field "Oxide Electronics" was christened to cover these areas of research and the areas of focus include: 1. Novel magnetic phenomena in oxides (Diluted magnetic oxides and Multiferroics)2. Wide band gap oxides and nitrides (ZnMgO, TiO2 and AlN) 3. Superhydrogenic Dopants in Oxides Dr Harendra (Harry) Parekh holds a PhD in Medicinal Chemistry from the University of Nottingham (UK, 2002), and is currently Senior Lecturer & Research Group leader - Drug/Gene Delivery at the Pharmacy Australia Centre of Excellence (PACE), the University of Queensland (UQ; 2005-present), Australia. His group's research interests lie in the engineering of biocompatible and highly translatable systems for the delivery of a broad range of therapeutics to treat a number of diseases of global significance, most notably age-related macular degeneration, diabetes and cancer. Through active collaborations with a range of academic and industry partners in India, China, Singapore, Germany, Brazil and USA his team is pursuing the application of dendrimers, liposomes and bubble liposomes as well as traditional Chinese & Indian medicine for both health and cosmetic benefit. Giorgia Pastorin received her MSc degree in Pharmaceutical Chemistry and Technology in 2000 and her Ph.D. in 2004 from the University of Trieste (Italy), working on adenosine receptors' antagonists.She spent 2 years as a postDoc at CNRS in Strasbourg (France) where she acquired some skills in drug delivery.She joined the National University of Singapore in June 2006, as Assistant Professor in the Department of Pharmacy-Faculty of Science and was promoted to Associate Professor in July 2011. Since June 2014, she is Assistant Head in the same Department.She has published more than 80 manuscripts and edited 2 books on carbon nanotubes and controlled release.