Summa Elvetica: A Casuistry of the Elvish Controversy (Arts of Dark and Light) (Hardcover) 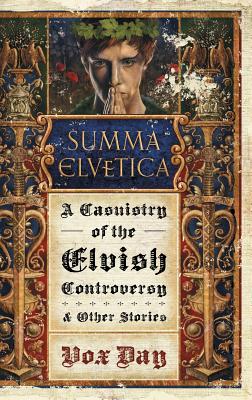 Utrum Aelvi habeant anima naturaliter sibi unita. Do elves have souls? In a fantasy world in which the realm of man is dominated by a rich and powerful Church, the Sanctified Father Charity IV has decided the time is ripe to make a conclusive inquiry into the matter. If, in his infallible wisdom, he determines that elves do have immortal souls, then the Church will be obliged to bring the Sacred Word of the Immaculate to them. But if he decides they do not, there will be holy war. Powerful factions line up on both sides of the debate. War-hungry magnates cast greedy eyes at the ancient wealth of the elven kingdoms and pray for a declaration that elves are little more than animals. And there are men who are willing to do more than merely pray. The delegation sent to the High King of the Elves is led by two great theologians, brilliant philosophers who champion opposite sides of the great debate. And in the Sanctiff's own stead, he sends the young nobleman, Marcus Valerius. Marcus Valerius is a rising scholar in the Church, talented, fearless, and devout. But he is inexperienced in the ways of the world and nothing in his life has prepared him for the beauty of the elves--or the monumental betrayal into which he rides.

SUMMA ELVETICA is the prelude to the massive epic high fantasy saga ARTS OF DARK AND LIGHT. It contains eight additional tales of Selenoth, including the Hugo Award finalist, Opera Vita Aeterna.