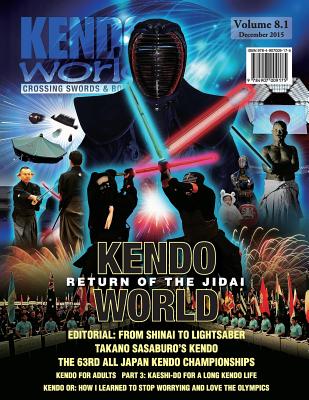 Editorial By Michael Ishimatsu-Prime In the Editorial, Michael discusses the recent ESPN documentary Evolution of the Lightsaber Duel and kendo's relationship with the Star Wars franchise, and looks at the year past and the year ahead for Kendo World. The 63rd All Japan Kendo Championships By Michael Ishimatsu-Prime A report on the 63rd All Japan Kendo Championships in which Kumamoto's Nishimura Hidehisa was victorious in only his second championships. The 63rd All Japan Kendo Championships in Numbers By Yulin Zhuang Kendo World statistician Yulin Zhuang presents details of the 63rd All Japan Kendo Championships in graph form to show such details as the age, grade, and profession of the competitors, as well as the ippon scored. Inishie wo Kangaeru - NEW SERIES By Alex Bennett A look at some of the old teachings in kendo. This issue looks at "Ichi-gan, ni-soku, san-tan, shi-riki"-First, the legs; second, the legs; third, guts; fourth, strength. Kendo - NEW SERIES By Takano Sasaburō Translated and annotated by Alex Bennett It's a bit difficult to know where to begin when discussing Takano Sasaburō's contributions to kendo. He was instrumental in developing the dan grading system for kendo, and was also a key member in the committee that created the Nihon Kendo Kata in 1912. His book simply titled Kendō was a tour de force in the creation of a uniform style for modern kendo, and is still considered a classic book by kendoka today. Takano's book will be translated in this series of articles, and the text will be annotated to contextualize its ground-breaking content. This issue of Kendo World will feature Chapter 1 which is divided into the following sections: Kendo's Value; Kendo and Annealing the Body and Mind; Bushido and Kendo; and The Practical Benefits of Kendo. sWords of Wisdom By Alex Bennett Based on the book Kenshi no meigon by Tobe Shinjūrō Chikushōshin wo sare - Purge oneself of the animal mind "Many martial arts draw on the powers of animals-the fury of a lion, nimbleness of a butterfly, agility of a monkey... The characteristics of Harigaya Sekiun's teachings were to completely forget about winning or losing the contest, and just be natural and seek a higher plain through aiuchi (mutual strike)." Kendo for Adults Part 3: Kaeshi-dō for as Long Kendo Life By Hatano Toshio Translated by Alex Bennett In this issue, Hatano-sensei explains how to strike kaeshi-dō correctly. Reidan Jichi By Ōya Minoru Translated by Alex Bennett In this edition of Reidan Jichi, Ōya-sensei examines debana-waza. Kendo or: How I Learned to Stop Worrying and Love the Olympics By Michael Ishimatsu-Prime In this article, Michael looks at kendo's inclusion in the 1964 Olympics as a demonstration event. It features some amazing archive photos and the results of the days matches. Kendo From Basics By Kendo Kyoshi 8-dan Hirakawa Nobuo Translated by Michael Ishimatsu-Prime Hirakawa Nobuo-sensei's Kendo From Basics was origi-nally published in 1993. It proved to be very popular and went through several printings in the original Japanese. Chinese and Korean language translations have also been made, and now, Kendo World has translated it into English and is hoping to publish it in 2016. As a preview, this edition of Kendo World features the section "Creating an opening with body movements" from the Applied Techniques chapter. .... .....