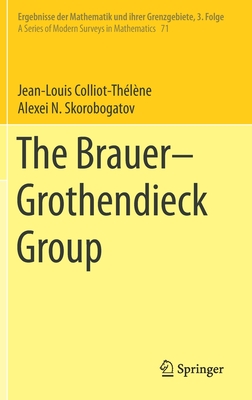 This monograph provides a systematic treatment of the Brauer group of schemes, from the foundational work of Grothendieck to recent applications in arithmetic and algebraic geometry.

The importance of the cohomological Brauer group for applications to Diophantine equations and algebraic geometry was discovered soon after this group was introduced by Grothendieck. The Brauer-Manin obstruction plays a crucial role in the study of rational points on varieties over global fields. The birational invariance of the Brauer group was recently used in a novel way to establish the irrationality of many new classes of algebraic varieties. The book covers the vast theory underpinning these and other applications.

Intended as an introduction to cohomological methods in algebraic geometry, most of the book is accessible to readers with a knowledge of algebra, algebraic geometry and algebraic number theory at graduate level. Much of the more advanced material is not readily available in book form elsewhere; notably, de Jong's proof of Gabber's theorem, the specialisation method and applications of the Brauer group to rationality questions, an in-depth study of the Brauer-Manin obstruction, and proof of the finiteness theorem for the Brauer group of abelian varieties and K3 surfaces over finitely generated fields. The book surveys recent work but also gives detailed proofs of basic theorems, maintaining a balance between general theory and concrete examples.

Over half a century after Grothendieck's foundational seminars on the topic, The Brauer-Grothendieck Group is a treatise that fills a longstanding gap in the literature, providing researchers, including research students, with a valuable reference on a central object of algebraic and arithmetic geometry.