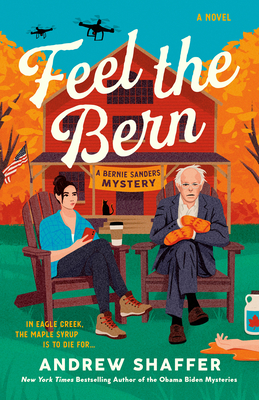 Who knew fighting for a living wage could be so deadly? Bernie Sanders and his Gen Z intern are drawn into a murder investigation in a small Vermont town in this hilarious spin on cozy mysteries from the New York Times bestselling author of Hope Never Dies: An Obama Biden Mystery.

Fall is bursting out all over Vermont, and while the rest of the Congress enjoys its recess, Senator Bernie Sanders has returned to his beloved home state for a weekend of events in Eagle Creek, “America’s #1 Leaf Peeping Destination.” It’s up to intern and Eagle Creek native Crash Robertson to keep the senator on schedule—and out of trouble.

Crash’s hopes for a quiet homecoming are dashed, however, when the lifeless body of a community banker with ties to “Big Maple” is found in Lake Champlain. While the sheriff’s department closes the case as an accident, a leaked autopsy indicates foul play…with a trail of syrup leading directly to one of the senator’s oldest friends. Bernie, taking a page from the cozy mysteries he’s addicted to, enlists Crash in a quest to uncover the killer’s true identity.

If Crash allows the senator to go too far off-script, it will be the end of her yet-to-begin political career. But as the suspect list grows to include a tech bro set on “disrupting” the maple syrup industry, struggling small-business owners, and even Crash’s own family, she realizes there’s more on the line than her own future. If the unlikely duo can’t solve the mystery of the Maple Murderer before they strike again, Bernie’s life-long fight for justice may come to an unplanned end.

Andrew Shaffer is the New York Times bestselling author of the Obama Biden mysteries Hope Never Dies and Hope Rides Again, the presidential satire The Day of the Donald, and over a dozen other humorous works of genre fiction from mystery to horror. An Iowa native, Shaffer lives in Louisville, Kentucky, with his wife, novelist Tiffany Reisz.

“Hilarious . . . [A] fast paced, entertaining mystery . . . Bernie Sanders makes for a terrific sleuth. . . . I highly recommend this as a fun holiday gift for the Bernie-lover in your life.”—Doreen Sheridan, Criminal Element

“A fun frolic . . . Of course there are mitten references. And maple syrup ends up being central to the murder mystery. But there’s more to the senator’s spiel here than shallow reflections on his love-hate relationship with capitalism. . . . Shaffer weaves in a little subtext on modern frictions, and possibilities, in dialogue between local and state political participants and their Washington representation.”—T.E. Lyons, Leo Weekly

“Amusing . . . Shaffer cheerfully ties sprawling plot threads together with clever nods to Vermont and its Socialist senator. Readers will be eager for more.”—Publishers Weekly