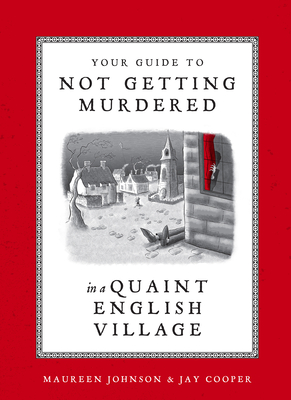 NATIONAL BESTSELLER • Considering a trip to a quaint English village? You’ll think twice after learning about the countless murderous possibilities lurking behind the bucolic façades, thanks to this illustrated guide from #1 bestselling author Maureen Johnson and illustrator Jay Cooper—perfect for fans of cozy mysteries.

A weekend roaming narrow old lanes, touring the faded glories of a country manor, and quaffing pints in the pub. How charming. That is, unless you have the misfortune of finding yourself in an English Murder Village, where danger lurks around each picturesque cobblestone corner and every sip of tea may be your last. If you insist on your travels, do yourself a favor and bring a copy of this little book. It may just keep you alive.

Brought to life with dozens of Gorey-esque drawings by illustrator Jay Cooper and peppered with allusions to classic crime series and unmistakably British murder lore, Your Guide to Not Getting Murdered in a Quaint English Village gives you the tools you need to avoid the same fate, should you find yourself in a suspiciously cozy English village (or simply dream of going). Good luck! And whatever you do, avoid the vicar.

Maureen Johnson is the #1 New York Times and USA Today bestselling author of many young adult novels, including the very murderous Shades of London series and the Stevie Bell mysteries: Truly Devious, The Vanishing Stair, The Hand on the Wall, and The Box in the Woods. She has also done collaborative works, such as Let It Snow with John Green and Lauren Myracle (now a movie on Netflix), and several books in the Shadowhunter universe with Cassandra Clare. Her books have been translated into more than thirty-five languages. For safety’s sake, she lives in New York City; the vicar cannot reach her there.

Jay Cooper’s books don’t normally include grisly murders, nefarious deeds, or corpses of any kind. He has written and/or illustrated more than twenty books for kids, including The Spy Next Door, The Pepper Party, and the Bots series, and has contributed work to the New York Times bestselling series The Last Kids on Earth. Currently he is illustrating a graphic novel entitled Super Atomic Wombat Girl. He’s also a graphic designer of theatrical advertising, and has worked on more than a hundred Broadway musicals and plays (which have heaps of deaths).