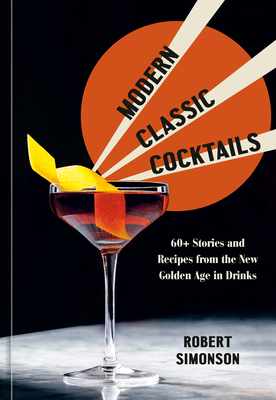 60+ recipes for today’s modern classics with entertaining backstories from the cocktail revival of the past thirty years, by a two-time James Beard Award nominee and New York Times cocktail and spirits writer.

“No proper drinking library is complete without Robert Simonson’s volumes, and Modern Classic Cocktails is one of the best yet.” —Adam Platt, New York magazine restaurant critic and author of The Book of Eating

One of the greatest dividends of the revival in cocktail culture that began in the 1990s has been the relentless innovation. More new cocktails—and good ones—have been invented in the past thirty years than during any period since the first golden age of cocktails, which lasted from roughly the 1870s until the arrival of Prohibition in 1920 and included the birth of the Martini, Manhattan, Daiquiri, and Tom Collins.

Just as that first bar-world zenith produced a half-century of classic recipes before Prohibition, the eruption of talent over the past three decades has handily delivered its share of drinks that have found favor with arbiters on both sides of the bar. Among them are the Espresso Martini, White Negroni, Death Flip, Old Cuban, Paper Plane, Siesta, and many more, all included here along with each drink's recipe origin story.

This book includes more than sixty easy-to-make drinks that all earned their stripes as modern classics years ago. Sprinkled among them are also a handful of critics' choices, potential classics that have the goods to become popular go-to cocktails in the future.

Robert Simonson writes about cocktails, spirits, bars, and bartenders for the New York Times. He is the author of A Proper Drink, The Old-Fashioned, 3-Ingredient Cocktails, The Martini Cocktail, and Mezcal & Tequila Cocktails. His writing has appeared in Saveur, Food & Wine, GQ, Bon Appetit, Vinepair, Grub Street, Imbibe, and PUNCH. His work has been nominated for two James Beard Awards, four IACP Awards, and thirteen Spirited Awards, winning one IACP Award and two Spirited Awards. A native of Wisconsin, he has lived in New York City since 1988.

“Simonson presents the backstories of more than 60 such easy-to-make modern classics in recipes sure to become repeat orders at your home bar.”—Epicurious

“Robert Simonson celebrates the modern day cocktail renaissance with a tightly curated collection of recipes from the buzziest spots across the country.”—Food & Wine

“This book is more than a collection of cocktail recipes created in the hipper zip codes over the last couple of decades. Cocktail historians 100 years from now will use this as a guide to the way savvy drinkers drank in the aughts and 2010s.”—Wall Street Journal

“Simonson is to the increasingly sprawling, crowded world of cocktail scholarship what Gibbon was to the study of ancient Rome—erudite, informed, invaluable. No proper drinking library is complete without his volumes, and Modern Classic Cocktails is one of the best yet.”—Adam Platt, New York magazine restaurant critic and author of The Book of Eating

“The Gold Rush, the Paper Plane, the Oaxaca Old-Fashioned—Robert Simonson had the brilliant idea to round up the recipes for the best drinks of the early-aughts cocktail revival, which, let’s face it, yielded more bar classics than even the pre-Prohibition era. Store this book near your spirits and turn up the Strokes, the Yeah Yeah Yeahs, and Interpol.”—David Kamp, author of The United States of Arugula

“The solar system had its Galileo, America had its de Tocqueville, the Civil War has its Ken Burns, and now the history of the modern cocktail has its own quintessential chronicler in the authoritative, dazzling, and delightful Robert Simonson.”—John Heilemann, coauthor of Game Change and host of Showtime’s The Circus

“If you are a cocktail enthusiast like me, this book is a must-have. Not only does it tell the story of each of these marvelous concoctions, it also gives the most accurate recipe, plus advice on how to build a great drink, which tools you will need to do so, and some beautiful photos. Like the drinks it chronicles, this book is bound to become a modern classic in its own right.”—Andy Ricker, chef and author of Pok Pok: Food and Stories from the Streets, Homes, and Roadside Restaurants of Thailand