All That She Carried: The Journey of Ashley's Sack, a Black Family Keepsake (Hardcover) 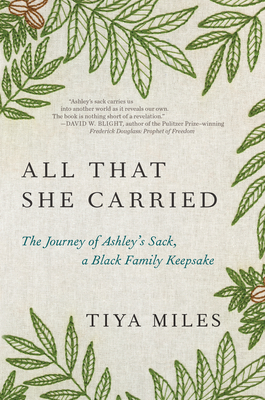 In her detailed, heartfelt and heartbreaking analysis of "Ashley's Sack", the slave-era artifact passed down amongst three generations of enslaved women in South Carolina, Tiya Miles shines a blinding, microcosmic light onto the inhumane darkness of slavery in the "Old South". One fundamental truth revealed being how little history actually survives of slaves and their culture given that the keeper's of "American History" are, first and foremost, white Americans. While there are no known written records left by Ashley, her mother or her daughter, Miles brilliantly uses the simple text on the sack itself to piece together, bit by bit, from the historical record and the records of female slaves that did end up a part of our historical records, what it truly meant to be a slave and, specifically, a female slave in and around Charleston at the peak of this long, dark chapter in American history. It is not a pretty picture, but is a significant one that all Americans should make time to "view". — Jon Fine

The words stitched on a cotton sack spoke to three generations of African American women as a testimony that they were loved. They detailed the rudimentary contents of the bag when it was given by a mother to her daughter whom she would never see again. The economy of a large portion of this country subsisted on the sweat and blood of enslaved people, where human misery was sown and reaped like the cotton on vast plantations. Despite their simplicity, the words on the sack eloquently detailed the degrading institution of slavery in America. This recipient of the National Book Award is a powerful indictment of a shameful past and an uncomfortable reminder that some of the stench of racism still lingers. — Alden Graves

NATIONAL BOOK AWARD WINNER • NEW YORK TIMES BESTSELLER • A renowned historian traces the life of a single object handed down through three generations of Black women to craft a “deeply layered and insightful” (The Washington Post) testament to people who are left out of the archives.

“A history told with brilliance and tenderness and fearlessness.”—Jill Lepore, author of These Truths: A History of the United States

In 1850s South Carolina, an enslaved woman named Rose faced a crisis: the imminent sale of her daughter Ashley. Thinking quickly, she packed a cotton bag for her with a few items, and, soon after, the nine-year-old girl was separated from her mother and sold. Decades later, Ashley’s granddaughter Ruth embroidered this family history on the sack in spare, haunting language.

Historian Tiya Miles carefully traces these women’s faint presence in archival records, and, where archives fall short, she turns to objects, art, and the environment to write a singular history of the experience of slavery, and the uncertain freedom afterward, in the United States. All That She Carried is a poignant story of resilience and love passed down against steep odds. It honors the creativity and resourcefulness of people who preserved family ties when official systems refused to do so, and it serves as a visionary illustration of how to reconstruct and recount their stories today

Tiya Miles is professor of history and Radcliffe Alumnae Professor at the Radcliffe Institute for Advanced Study and director of the Charles Warren Center for Studies in American History at Harvard University. She is a recipient of a MacArthur Foundation fellowship and the Hiett Prize in the Humanities from the Dallas Institute of Humanities and Culture. Miles is the author of The Dawn of Detroit, which won the Frederick Douglass Book Prize, among other honors, as well as the acclaimed books Ties That Bind, The House on Diamond Hill, The Cherokee Rose: A Novel of Gardens and Ghosts, and Tales from the Haunted South, a published lecture series.

“Deeply and lovingly researched . . . a testament to the power of story, witness, and unyielding love.”—Atlanta Journal-Constitution

“Through [Miles’s] interpretation, the humble things in the sack take on ever-greater meaning, its very survival seems magical, and Rose’s gift starts to feel momentous in scale.”—Rebecca Onion, Slate

“A brilliant exercise in historical excavation and recovery . . . With creativity, determination, and great insight, Miles illuminates the lives of women who suffered much, but never forgot the importance of love and family.”—Annette Gordon-Reed, author of The Hemingses of Monticello

“[An] extraordinary story . . . Unique and unforgettable.”—Ms.

“[A] powerful history of women and slavery.”—The New Yorker

“Tiya Miles is a gentle genius . . . All That She Carried is a gorgeous book and a model for how to read as well as feel the precious artifacts of Black women’s lives.”—Imani Perry, author of Breathe: A Letter to My Sons

“All That She Carried is a moving literary and visual experience about love between a mother and daughter and about many women descendants down through the years. Above all it is Miles’s lyrical story, written in her signature penetrating prose, about the power of objects and memory, as well as human endurance, in the history of slavery. The book is nothing short of a revelation.”—David W. Blight, Yale University, author of the Pulitzer Prize–winning Frederick Douglass: Prophet of Freedom

“Ashley’s Sack, as it is known, with its short and simple message of intergenerational love, becomes a portal through which Tiya Miles views and reimagines the inner lives of Black women. She excavates the history of Black women who face insurmountable odds and invent a language that can travel across time.”—Michael Eric Dyson, author of Long Time Coming: Reckoning with Race in America

“Tiya Miles uses the tools of her trade to tend to Black people, to Black mothers and daughters, to our wounds, to collective Black love and loss. This book demonstrates Miles’s signature genius in its rare balance of both rigor and care.”—Brittney Cooper, author of Eloquent Rage: A Black Feminist Discovers Her Superpower

“All That She Carried is a masterpiece work of African American women’s history that reveals what it takes to survive and even thrive. Read this book and then pass it on to someone you love.”—Martha S. Jones, author of Vanguard: How Black Women Broke Barriers, Won the Vote, and Insisted on Equality for All

“Tiya Miles has written a beautiful book about the tragic materiality of black women’s lives across three generations, through slavery and freedom. This book is for anyone interested in learning about black people's centrality to American history.”—Stephanie Jones-Rogers, author of They Were Her Property