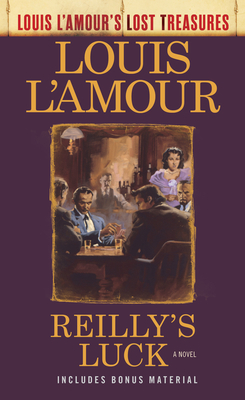 Val Darrant was just four years old the snowy night his mother abandoned him. But instead of meeting a lonely death, he met Will Reilly—a gentleman, a gambler, and a worldly, self-taught scholar. For ten years they each were all the family the other had, traveling from dusty American boomtowns to the glittering cities of Belle Époque Europe—until the day Reilly’s luck ran out in a roar of gunfire.

But it wasn’t a gambling brawl or a pack of thieves that sealed Will’s fate. It was a far more complex story that Val would soon uncover—one that would bring him face-to-face with the one person he least wants to see: his mother. With the help of a beautiful, street-smart rancher and the woman who was Will Reilly’s lost love, Val must close this last cruel chapter of his past before he can turn the page on an uncertain future.

Louis L’Amour’s Lost Treasures is a project created to release some of the author’s more unconventional manuscripts from the family archives.

In Louis L’Amour’s Lost Treasures: Volumes 1, Beau L’Amour takes the reader on a guided tour through many of the finished and unfinished short stories, novels, and treatments that his father was never able to publish during his lifetime. L’Amour’s never-before-seen first novel, No Traveller Returns, faithfully completed for this program, is a voyage into danger and violence on the high seas. These exciting publications will be followed by Louis L’Amour’s Lost Treasures: Volume 2.

Additionally, many beloved classics will be rereleased with an exclusive Lost Treasures postscript featuring previously unpublished material, including outlines, plot notes, and alternate drafts. These postscripts tell the story behind the stories that millions of readers have come to know and cherish.

Our foremost storyteller of the American West, Louis L’Amour has thrilled a nation by chronicling the adventures of the brave men and woman who settled the frontier. There are more than three hundred million copies of his books in print around the world.