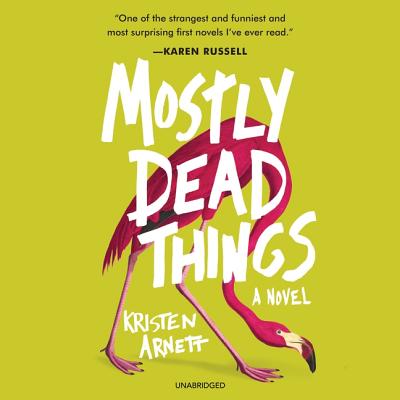 This great American taxidermy novel is charming, eccentric, enjoyable, and pretty sexy. The narrator, a third generation taxidermist, finds her father in their shop after his suicide which sets in motion the total breakdown of their family. She and her brother had been in love and sleeping with the same woman (he was married to her) before she impulsively leaves without a word. The mother/widow turns in her grief to making sexually explicit and kinky tableaux vivants from the taxidermied animals. Chapters alternate in the present working towards the opening of the mother's show at a local art gallery and those set in the past anchored by grisly cadavers. There's an unforgettable sex scene while the narrator describes a childhood memory of tasting the husk of a dead cicada.

“After her father commits suicide, Jessa is tasked with saving her family’s taxidermy business from going bankrupt. She also has to take care of her family’s strange problems — including her mother’s affinity for turning their taxidermy into risqué works of art. Mostly Dead Things is a fun, eccentric book with a steamy lesbian romance, ongoing sibling rivalry, and dark confessions of a family that is willing to go the mile in order to make ends meet. Stuffed with humor, heartfelt moments, and some gritty bits, Arnett’s writing will make you laugh, cry, and wonder how an author’s first novel can be so engaging and well-written!”
— Sage Cristal, UC San Diego Bookstore, La Jolla, CA

“Kristen Arnett’s Mostly Dead Things is a unique and charismatic story that winds its way through family matters, personal strife, and most important of all: taxidermy. Great for fans of Karen Russell’s Swamplandia!”
— Delany Holcomb, Bookmarks, Winston-Salem, NC

One morning, Jessa-Lynn Morton walks into the family taxidermy shop to find that her father has committed suicide, right there on one of the metal tables. Shocked and grieving, Jessa steps up to manage the failing business, while the rest of the Morton family crumbles. Her mother starts sneaking into the shop to make aggressively lewd art with the taxidermied animals. Her brother Milo withdraws, struggling to function. And Brynn, Milo's wife―and the only person Jessa's ever been in love with―walks out without a word.

As Jessa seeks out less-than-legal ways of generating income, her mother's art escalates―picture a figure of her dead husband and a stuffed buffalo in an uncomfortably sexual pose―and the Mortons reach a tipping point. For the first time, Jessa has no choice but to learn who these people truly are, and ultimately how she fits alongside them.

Kristen Arnett's debut novel is a darkly funny, heart-wrenching, and eccentric look at loss and love.