This Will Not Pass: Trump, Biden, and the Battle for America's Future (Paperback) 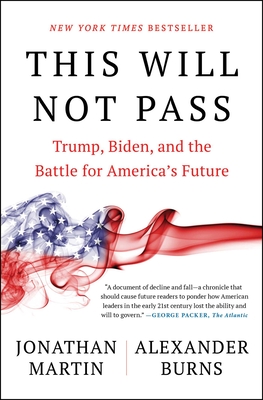 The “blockbuster” (The Guardian) New York Times bestseller, a shocking, definitive account of the 2020 election and the first year of the Biden presidency by two New York Times reporters, exposes the deep fissures within both parties as the country approaches a political breaking point.

This is the authoritative, “deeply reported” (The Wall Street Journal) account of an eighteen-month crisis in American democracy that will be seared into the country’s political memory for decades to come. With stunning, in-the-room detail, New York Times reporters Jonathan Martin and Alexander Burns show how both our political parties confronted a series of national traumas, including the coronavirus pandemic, the January 6 attack on the Capitol, and the political brinksmanship of President Biden’s first year in the White House.

From Donald Trump’s assault on the 2020 election and his ongoing campaign of vengeance against his fellow Republicans to the behind-the-scenes story of Biden’s selection of Kamala Harris as his running mate and his bitter struggles to unite the Democratic Party, this book exposes the degree to which the two-party system has been strained to the point of disintegration. More than at any time in recent history, the long-established traditions and institutions of American politics are under siege as a set of aging political leaders struggle to hold together the changing country.

Martin and Burns break news on most every page, drawing on hundreds of interviews and never-before-seen documents and recordings from the highest levels of government. This “masterful” (George Stephanopoulos) book asks the vitally important (and disturbing) question: can American democracy, as we know it, ever work again?

Jonathan Martin is a senior political writer for The New York Times, a political analyst for CNN and the coauthor of the New York Times bestseller, This Will Not Pass: Trump, Biden and the Battle for America’s Future. He joined the Times in 2013 after working as a senior political writer for POLITICO. His work has been featured in The New Republic, National Review, The Washington Post, and The Wall Street Journal, among others. A native of Arlington, Virginia, Martin is a graduate of Hampden-Sydney College. He and his wife, Betsy, live in Washington and New Orleans.

Alexander Burns is a national correspondent for The New York Times and a political analyst for CNN. He has covered politics at the Times since 2015, including as a national political correspondent in the 2020 campaign. Prior to joining the Times, he was a reporter and editor at POLITICO. Born and raised in New York City, he is a graduate of Harvard College, where he edited the Harvard Political Review. He and his wife, MJ Lee, live in Washington, DC, with their daughter, Penelope, and their dog, Bandit.

“One recent history makes different points and has larger themes. This Will Not Pass by Jonathan Martin and Alex Burns captures the insularity of Washington and the closed-off nature of the conversations that consume it. It is deeply reported, with sourcing from both parties and criticisms of both, which is refreshing. It also captures both parties’ refusal to be honest with their own voters."
— The Wall Street Journal

"The authors are tireless reporters, and the book’s impact lies less in any headline revelations than in the accumulation of small details that can almost seem routine but that reveal the deeper condition of American democracy…. It’s a document of decline and fall—a chronicle that should cause future readers to ponder how American leaders in the early 21st century lost the ability and will to govern."
— George Packer, The Atlantic

"A deeply reported new book... paints an authoritative portrait of the Biden-Harris relationship— or absence of one."— The New York Times

"It [is with] this color and detail where Martin and Burns excel. They give the scenes and add the specificities of the moments ......when moral virtue and civic interest yield to pure opportunism. ......It is still uncertain how what the two authors describe as “an existential battle for the survival of the democratic system” will end. But whenever future historians chronicle the final result, they won’t need to engage in any guesswork or speculation. They can simply open the pages of This Will Not Pass and discover who met the moment and who fell short."
— New York Magazine

"Martin and Burns have chronicled a tumultuous time with precision and scope and their tireless reporting unearths revealing new details. Their wide-angle lens reminds us how much was— and remains— at stake. Masterful!"
— George Stephanopoulos, ABC News anchor

“What an account of these extraordinary times. Martin and Burns deliver reporting from deep inside both parties with fresh facts and new details on nearly every page about a political system pushed to the brink. When future historians chronicle this time of crisis they will turn to this book as a deeply valuable account of our all too human leaders.”
— Peggy Noonan, The Wall Street Journal

"This is an enthralling and at times frightening account that weaves together the Trump implosion and the roller coaster ride of Biden’s first year. Deeply reported, it combines amazing inside scoops with a fine feel for the historic forces that have roiled our times. By helping us understand what happened, it provides insight about where we are heading.”
— Walter Isaacson, #1 New York Times bestselling author of The Code Breaker

"Alex Burns and Jonathan Martin are two of our best sourced, most insightful and honest chroniclers of American politics. Their book takes us not only through those harrowing final days of the Trump-era but is the first to deeply explore the central tension of President Biden’s presidency thus far: that of a man who is trying to balance 'national reconciliation' with his 'aspiration to craft a presidency of grand and lasting impact.'   The writing, full of luscious details and newsy nuggets, allows the reader an 'in the room where it happened' experience."
— Amy Walter, Publisher & Editor-in-Chief, The Cook Political Report with Amy Walter

"An impressively sourced and consistently revealing chronicle of America’s 'political emergency' in the months between the onset of the coronavirus pandemic and the start of President Biden’s second year in office...What emerges is a clear-eyed and often dramatic portrait of two major political parties animated as much by internal divisions as by cross-aisle discord....Revelations abound—of Kevin McCarthy’s initial plan to call on Trump to resign after the Capitol riot; of Republican efforts to lure Joe Manchin and Kyrsten Sinema into switching parties—as do sharp character sketches. Politics junkies should consider this required reading."
— Publishers Weekly (starred review)

"Red meat for politics watchers, unsparing in its depiction of a time of torment."
— Kirkus Reviews (starred review)