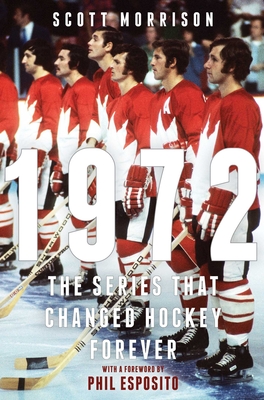 The legacy of the greatest hockey series ever played, fifty years later, with stories from the players that shed new light on those incredible games and times.

“Cournoyer has it on that wing. Here’s a shot. Henderson made a wild stab for it and fell. Here’s another shot. Right in front...they score! Henderson has scored for Canada!”

These immortal words, spoken to hockey fans around the world by the legendary broadcaster Foster Hewitt, capture the historic final-seconds goal scored by Paul Henderson that won the 1972 Summit Series against the Soviet Union. Hockey fans know the moment well, but the story of those amazing eight games has never been fully told—until now.

The series was the first of its kind, and one of the most dramatic sporting showdowns in history. With the Soviets dominating international hockey, this series was meant to settle the debate, once and for all, of who owned the game. It was Canada’s best against the Soviets for the first time. And in the shadow of the Cold War, this was about more than eight games of hockey.

Expectations were high as the series began. This was supposed to be easy for Team Canada, but after the disappointing first four games on home ice with only one win, victory seemed out of reach. With the final four games in Moscow, Canada got a rare glimpse behind the iron curtain as the team, as well as three thousand raucous fans, arrived in the USSR. Amid the culture shock and strained relations, what followed was a tug-of-war battle that lasted to the dying seconds of game 8.

Now, five decades after this historic event, it’s time to reflect on the greatest hockey series ever played. Veteran journalist and hockey analyst Scott Morrison uses a storyteller’s voice to reveal what it meant to hockey then, and what it means now. Filled with the memories of the players and others involved with the series, he shows how it changed the game, and challenged a nation’s sense of identity and place in the world.

Scott Morrison has provided cogent and colourful hockey analysis since his start in 1979, covering the Maple Leafs and NHL for the Toronto Sun. Having reported and provided analysis for Sportsnet, Hockey Night in Canada, and CBC Television and Radio, while making regular appearances across the sports-radio dial, he brings a trusted and measured voice to the hockey-media landscape, twice serving as president of the Professional Hockey Writers’ Association. He has written numerous books, including 100 Years, 100 Moments: A Centennial of NHL Hockey, and Catch 22: My Battles, in Hockey and Life with Rick Vaive. In 2006, he received the Hockey Hall of Fame’s Elmer Ferguson Memorial Award. He lives in Toronto with his son, Mark. Follow him on Twitter @SMorrisonMedia.

“Politics intersects with sports in 1972: The Series that Changed Hockey Forever, which celebrates the 50th anniversary of Canada’s victory over the USSR in the tense eight-game Summit Series. Veteran hockey commentator Scott Morrison couldn’t have picked a better time for a story of Canada besting Russia.”
— Toronto Star

“A fascinating and well-written piece . . . It is a must read for those who remember the Series . . . and all that led up to it.”
— The New York Journal of Books

“I still break into a sweat when I think about 1972. The mixture of national anxiety, anticipation, disappointment, and celebration. All those emotions are even deeper now after reading Scott’s fabulous inside story of just what happened during those legendary eight games.”
— PETER MANSBRIDGE, bestselling author of Off the Record

“Morrison reveals a masterful understanding of the game and its players, with unparalleled access to the greats who skated for Canada. Their voices—the Esposito brothers, Dryden, Park, the Mahovlichs, Henderson, and more—drive a riveting narrative of the battle between two teams and a test of two hockey systems in the unforgettable clash of nations. This was a war on and off the ice.”
— TIM COOK, bestselling author of Vimy: The Battle and the Legend

“The ’72 Summit Series has been part of our hockey history in Canada for 50 years. But while we all know the story, Scott Morrison’s book takes you on a journey behind the scenes uncovering all the drama, intrigue, and ups and downs from those who were there. A thoroughly entertaining read about the greatest hockey tournament in our country’s history.”
— CHRISTINE SIMPSON, NHL broadcaster and features reporter for Sportsnet

“Morrison provides a comprehensive view of this epic battle between hockey’s superpowers. . . . An entertaining read that will appeal to hockey fans and readers interested in the intersection of sports and politics.”
— Library Journal