Shining in the Dark: Celebrating 20 Years of Lilja's Library (Paperback) 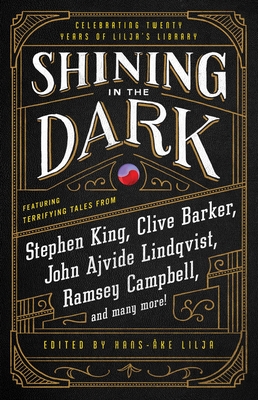 From the founder of the #1 Stephen King news website Lilja’s Library comes a terrifying and deliciously creepy anthology of horror stories, including a rare story from Stephen King himself, classics by Clive Barker and Edgar Allan Poe, and a novella by John Ajvide Lindqvist (Let the Right One In).

Celebrating twenty years of the expansive Stephen King fan site Lilja’s Library, this creepy collection of stories is perfect for horror fans of all backgrounds. With a terrifying story that has never been previously included in any of Stephen King’s collections, Shining in the Dark is an unforgettable anthology, featuring short stories by some of the genre’s best-known and most talented authors.

Stories include:
“The Blue Air Compressor” by Stephen King
“The Net” by Jack Ketchum and P. D. Cacek
“The Novel of the Holocaust” by Stewart O’Nan
“Aeliana” by Bev Vincent
“Pidgin and Theresa” by Clive Barker
“An End To All Things “ by Brian Keene
“Cemetery Dance” by Richard Chizmar
“Drawn to the Flame” by Kevin Quigley
“The Companion” by Ramsey Campbell
“The Tell-Tale Heart” by Edgar Allan Poe
“A Mother’s Love” by Brian James Freeman
“The Keeper’s Companion” by John Ajvide Lindqvist

For over two decades now, Hans-Ake Lilja has been one of the leading voices on the internet when it comes to covering and reporting on Stephen King’s books and movies. His website, Lilja’s Library, is the die-hard fan’s source for information about new King projects and breaking news, but Lilja has also featured his own in-depth reviews and interviews with the most important people in King’s world, including Stephen King himself.