The Upswing: How America Came Together a Century Ago and How We Can Do It Again (Paperback) 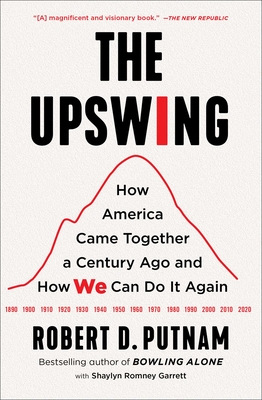 Persuasive analysis of how American turned from a late 19th Century "I" generation to an inclusive "We" society through two-thirds of the 20th Century. Putnam outlines the economic, political, social, and cultural forces that triggered our current reversion to "I," and how we can redirect those forces to recreate a society of community and shared purpose. — Mike Hare

From the author of Bowling Alone and Our Kids, a “sweeping yet remarkably accessible” (The Wall Street Journal) analysis that “offers superb, often counterintuitive insights” (The New York Times) to demonstrate how we have gone from an individualistic “I” society to a more communitarian “We” society and then back again, and how we can learn from that experience to become a stronger more unified nation.

Deep and accelerating inequality; unprecedented political polarization; vitriolic public discourse; a fraying social fabric; public and private narcissism—Americans today seem to agree on only one thing: This is the worst of times.

But we’ve been here before. During the Gilded Age of the late 1800s, America was highly individualistic, starkly unequal, fiercely polarized, and deeply fragmented, just as it is today. However as the twentieth century opened, America became—slowly, unevenly, but steadily—more egalitarian, more cooperative, more generous; a society on the upswing, more focused on our responsibilities to one another and less focused on our narrower self-interest. Sometime during the 1960s, however, these trends reversed, leaving us in today’s disarray.

In a “magnificent and visionary book” (The New Republic) drawing on his inimitable combination of statistical analysis and storytelling, Robert Putnam analyzes a remarkable confluence of trends that brought us from an “I” society to a “We” society and then back again. He draws on inspiring lessons for our time from an earlier era, when a dedicated group of reformers righted the ship, putting us on a path to becoming a society once again based on community. This is Putnam’s most “remarkable” (Science) work yet, a fitting capstone to a brilliant career.

Robert D. Putnam is the Malkin Research Professor of Public Policy at Harvard University and a former Dean of the John F. Kennedy School of Government. Nationally honored as a leading humanist and a renowned scientist, he has written fourteen books, including the bestselling Our Kids and Bowling Alone, and has consulted for the last four US Presidents. In 2012, President Obama awarded him the National Humanities Medal, the nation’s highest honor for contributions to the humanities. His research program, the Saguaro Seminar, is dedicated to fostering civic engagement in America. Visit RobertDPutnam.com.

Shaylyn Romney Garrett is a writer and award-winning social entrepreneur. She is a founding contributor to “Weave: The Social Fabric Project,” an Aspen Institute initiative. She also contributed to Robert D. Putnam and David E. Campbell’s American Grace. Shaylyn holds a degree in Government from Harvard University, and is a returned Peace Corps volunteer. Visit ShaylynRomneyGarrett.com.

"Ambitious. . . . Putnam and Garrett are rewriting the political history of the twentieth century here. . . . [A] magnificent and visionary book."
— Win McCormack

"In a sweeping yet remarkably accessible book, Mr. Putnam and Ms. Garrett provide a crucial missing ingredient in contemporary social commentary: They lay out a sociology of success that, drawing on our history, can help us think concretely about how to enable a revival of American life."
— Yuval Levin

"This pivotal moment isn’t just the result of four years of Donald Trump. It’s the culmination of 50 years of social decay. The Upswing, a remarkable new book by Robert D. Putnam and Shaylyn Romney Garrett, puts this situation in stark relief."
— David Brooks

“Remarkable . . . Despite painting a bleak portrait of recent U.S. history, every shred of data in The Upswing reverberates with the same exhortation: We came together once, and we can do it again . . . An extended call for a new generation totake up the fight.”
— James Morone

"A top-notch addition to the why-America-is-in-such-a-mess genre. . . . A tour de force exploration of why America got better and then went into reverse."
— Kirkus Reviews (starred review)

“In the most ambitious and compelling of his several exemplary books, Robert Putnam masterfully re-casts the history of our country from the Gilded Age to the present. . . . The Upswing is a singularly illuminating book and a clarion call to action.”
— David M. Kennedy, Professor of History Emeritus, Stanford University

"No one understands the United States better than Bob Putnam, and no one else could have written this essential book. The Upswing brings together his vast knowledge, love of data, storytelling ability, and passion. It's an astonishing work that reminds Americans we are a great people, shows us what we can accomplish when we come together, and makes clear that we need to do so again. Now."
— Andrew McAfee, MIT scientist, author of More from Less, and coauthor of The Second Machine Age