The Unofficial Guide to Game of Thrones (Paperback) 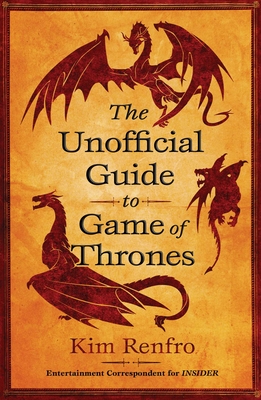 The everything-you-missed, wanted-to-know-more-about, and can’t-get-enough guide to the Game of Thrones television series—from the first episode to the epic finale. Valar morghulis!

Spanning every episode across all eight seasons, INSIDER’s entertainment correspondent Kim Renfro goes deep into how the show was made, why it became such a phenomenon and explores every detail you want to know. It’s the perfect book to look back at all you may have missed or to jump-start you on a second viewing of the whole series.

As an entertainment correspondent, Renfro has covered the show’s premieres, broken down key details in scenes, explored characters’ histories, and interviewed the cast, directors, and crew. In this book, she sheds new light on the themes, storylines, character development, the meaning of the finale, and what you can expect next.

Some of the questions answered here include: What was the Night King’s ultimate purpose? How did the show effect George R.R. Martin’s ability to finish the book series? Why were the final seasons shorter? Why did the direwolves get shortchanged? How were the fates of Jon Snow and Daenerys Targaryen foretold from the start? Was that really a bittersweet ending?

Winter may have come and gone, but there is still plenty to discover and obsess over in this behind-the-scenes fan guide to the Game of Thrones HBO series.

Kim Renfro is an entertainment correspondent and Game of Thrones expert for INSIDER. She has also moderated panels for the annual Con of Thrones fan convention and been a guest on many GoT-themed podcasts. She lives in Los Angeles. The Unofficial Guide to Game of Thrones is her first book.

“An enjoyable and thought-provoking overview of a landmark television series.”
— Publishers Weekly

“Kim Renfro’s The Unofficial Guide to Game of Thrones is a fantastic companion book for every Game of Thrones-obsessed fan, going into incredible, hitherto-unseen detail on how an ‘unfilmable’ series of books were adapted into the most famous television show of the 2010s. From casting decisions to adaptation choices to costuming and the future of Westeros on the small screen, Kim engages these topics with incredible passion and deep insight that will thrill the most casual fan of the show to the most engaged Thrones fanatic.”
— Jeff Hartline, a.k.a. BryndenBFish, founder of the Wars and Politics of Ice and Fire blog and cohost of the NotACast Podcast