Mr. Humble and Dr. Butcher: A Monkey's Head, the Pope's Neuroscientist, and the Quest to Transplant the Soul (Hardcover) 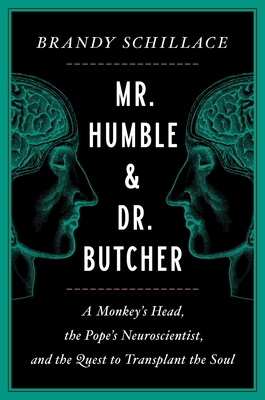 Since hearts, kidneys, and other organs can be transplanted, why not the human head? Dr. Robert White worked toward that controversial, morally-questionable goal his entire life, and his story raises medical, ethical, and spiritual concerns that reverberate to this day. — Mike Hare

The “delightfully macabre” (The New York Times) true tale of a brilliant and eccentric surgeon…and his quest to transplant the human soul.

In the early days of the Cold War, a spirit of desperate scientific rivalry birthed a different kind of space race: not the race to outer space that we all know, but a race to master the inner space of the human body. While surgeons on either side of the Iron Curtain competed to become the first to transplant organs like the kidney and heart, a young American neurosurgeon had an even more ambitious thought: Why not transplant the brain?

Dr. Robert White was a friend to two popes and a founder of the Vatican’s Commission on Bioethics. He developed lifesaving neurosurgical techniques still used in hospitals today and was nominated for the Nobel Prize. But like Dr. Jekyll before him, Dr. White had another identity. In his lab, he was waging a battle against the limits of science and against mortality itself—working to perfect a surgery that would allow the soul to live on after the human body had died.

This “fascinating” (The Wall Street Journal), “provocative” (The Washington Post) tale follows his decades-long quest into tangled matters of science, Cold War politics, and faith, revealing the complex (and often murky) ethics of experimentation and remarkable innovations that today save patients from certain death. It’s a “masterful” (Science) look at our greatest fears and our greatest hopes—and the long, strange journey from science fiction to science fact.

Brandy Schillace is a historian of medicine and the critically acclaimed author of Death’s Summer Coat: What Death and Dying Teach Us About Life and Living and Clockwork Futures: The Science of Steampunk. The host of the Peculiar Book Club, a livestream community for authors and their readers, she has appeared on the Travel Channel’s Mysteries at the Museum, NPR’s Here and Now, and FOX’s American Built. Dr. Schillace is a 2018 winner of the Arthur P. Sloan Science Foundation award and serves as editor-in-chief of BMJ’s Medical Humanities Journal.

“Spirited and breezily provocative… White’s unorthodox quest made national news several times over the course of his long career, but in Mr. Humble and Dr. Butcher, Brandy Schillace finally gives it the thoughtful book-length treatment it deserves.”
— The Washington Post

“Engrossing. Schillace is a first-rate historian with the perceptive eye of a storyteller.”
— Lindsey Fitzharris, New York Times bestselling author of The Butchering Art

“Well-researched. Well-written. Suspenseful. Best of all, the book is fascinating.”
— The Wall Street Journal

“Brandy Schillace has taken a most bizarre and ethically complex episode in the history of medicine and crafted from it a narrative that is nuanced, informed, and almost impossible to stop reading. I swear to you, if you have a brain inside your head (or anywhere else), you will find this book fascinating.”
— Mary Roach, New York Times bestselling author of Stiff

“Brilliant, disturbing, and fascinating. A true-life story even more dark and twisted than the X-Files case it inspired.”
— Frank Spotnitz, Golden Globe-winning writer and producer of The X-Files

“Lively and sometimes horrifying... A fascinating and disturbing look at the complicated world of medical research and one of its most extreme practitioners.”
— The Columbus Dispatch