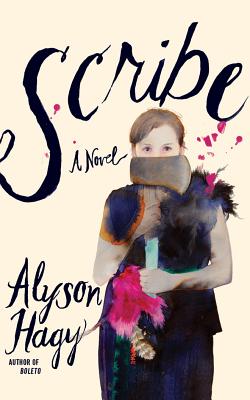 This is the kind of book you can imagine yourself savoring curled up next to a warm fire while the wind whistles outside. A woman living alone in a land ravaged by war and disease strikes a bargain with a handsome stranger to write and deliver a letter that he hopes will partially atone for his lawless, dissolute past. Scribe is a compact, hypnotically readable novel, seemingly culled from folklore and mysticism, that could serve as a model for how vital the element of story is to any work of fiction. — Alden Graves

“I’m sure many book lovers among us would bemoan the lost art of letter-writing if given the chance. Alyson Hagy’s short novel Scribe returns us to a time when the written word was sacred—in an alternate timeline, to be exact. After a civil war and an epidemic have ravaged the Appalachian region, one woman has become famous for her almost mystical ability to transcribe thoughts and emotions onto paper. Part historical fiction and part post-apocalyptic saga, Scribe finds the perfect alchemy between Cold Mountain and The Leftovers.”
— Sarah Crossland, New Dominion Bookshop, Charlottesville, VA

“Scribe is a novel about dystopian Appalachia following the Civil War, a place ravaged by sickness and divvied up by the brute strength of men and their ability to defeat any invaders. If that doesn’t pique your interest, its main character is a complicated woman with a highly valued skill: the ability to write. In the wake of war and widespread fever, she sustains herself by creating paper and ink and writing the most heartbreakingly poetic letters to help others declare their triumphs and sins. After getting a special request from an unusual passerby, she finds herself in danger and must flee the once-beautiful but now brutal farmland she’s always called home. Scribe is as deeply imaginative as it is viscerally emotional, and Alyson Hagy’s ability to temper darkness with light makes it a spellbinding novel.”
— Morgan McComb, Raven Book Store, Lawrence, KS