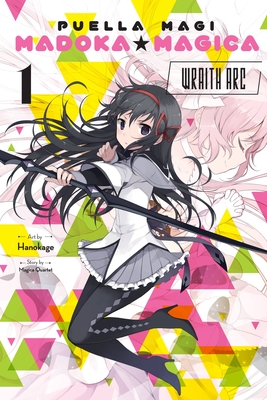 This is book number 1 in the Puella Magi Madoka Magica: Wraith Arc series.

The Wraith Arc interquels from the end of the show up through the events at the start of Rebellion. I'd recommend reading it before watching Rebellion, since it doesn't spoil anything while very effectively foreshadowing the events of the film. But if you're like me and didn't know a/b the Wraith Arc until you'd finished the series, I'd still go so far as to call this mandatory reading for fans of the original Madoka Magica. By the end of the 2nd volume, it's already in the running for "most existentially horrific moments" of the whole franchise. I will caution: the action beats might be a little hard to follow if you're unfamiliar w/ the main-series, but if you have some gauge on how the fighting's supposed to look, Hanokage does a killer job of making static images look & feel just like fights from the anime. — David Gray-Smith

Bound by the promise of a wish granted, magical girls are charged with battling the wraiths that move unseen through the masses of Mitakihara and devour the passions of their human prey. Mami, Kyouko, and Sayaka are of one mind when it comes to fighting these entities, but their task is hindered by squabbles within the group. Mami fears Sayaka and Kyouko will never see eye to eye, even as a giant wraith unlike any they’ve ever fought threatens to make a feast of them all!