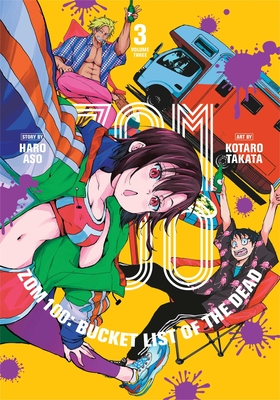 One by one, Akira has been checking little items like cleaning his room and snagging a new TV off his bucket list. Now, having grown weary of the hotbed of infection that is Tokyo, Akira makes the decision to head to his parents’ home in Gunma. But to get there, he’ll need to get past his former boss!

In 2004, Haro Aso received Shonen Sunday’s Manga College Award for his short story “YUNGE!” After the success of his 2007 short story “Onigami Amon,” Aso got the chance to start a series of his own—2008’s Hyde & Closer. In 2010, his series Imawa no Kuni no Alice (Alice in Borderland) began serialization in Shonen Sunday S. Zom 100: Bucket List of the Dead is his follow-up series.