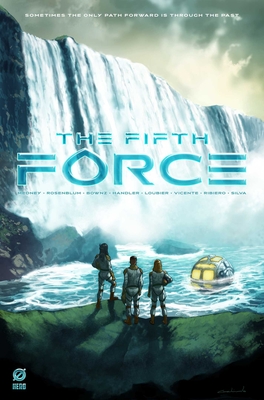 Sometimes the only path forward is through the past.

Two things you need to know: The earth is dying and time travel is real. We have exhausted, no, abused, the fossil fuels of this planet and now we're facing a self-inflicted extinction level event.  Our only hope, my team of Time Inflectors must travel back in time in order to save all of our futures.

Earth is on the verge of extinction. We have limited crude oil and our primary fuel sources are negligible. The carbon clouds signal the end of our species. We have but a few options: leave the planet… or fix it.

We are the TFA, a special Canada-based agency that stumbled across a revolutionary discovery. The fifth Elemental force. Time.

We built a freaking time machine based on the new physical sciences, believing we can go back to the “inflection points” of this extinction level event and fix things.

The irony here is that the fuel we need to operate the invention, is the very fuel that led us to this juncture.

Even with the precautions in place we only have enough for a limited number of time jumps, 5 to be exact.

To make things even more difficult, time travel has a few additional “restrictions” as the discovery of time as a fundamental force provides a Quantum and Physical science sandbox. This means that the tachyons that interact with matter do so similarly to protons and neutrons; they cannot engage in something that would create a paradox.

In layman's terms, they prohibit certain interactions between those from the future and those in the present.

I’m Doctor Malik Fikai, one of the three Inflectors tasked with going back and fixing this mess before it happens, otherwise our future is history.

“The Fifth Force is a clever, educational read and will be the perfect book to study in either science or art classes” - Darryll Robson Monkeys Fighting Robots

Matthew Medney is the CEO of the generational & legendary Heavy Metal Magazine, and co-founded Boutique Storytelling Company, Herø Projects where he also still presides as CEO. Leading the charge at two genre focused brands, Matthew spends most of his time thinking about the unknown.

A graduate of the University Of Massachusetts at Amherst's Isenberg School of Management, Matthew started his career in the live events space, operating as a tour & production manager, traveling across 45 countries producing over 200 shows for concerts such as Coachella, Ultra Music Festival, Electric Daisy Carnival & Lollapalooza.

"A Prolific Writer" (Variety) with the ultimate goal of looking to expand minds and engage readers through high concept Science Fiction, Medney has authored best selling works such as his hard sci-fi novel Beyond Kuiper: The Galactic Star Alliance and the graphic novel Dark Wing. In addition, he has penned multiple comic books including The Red, and his highly anticipated forthcoming work The Adventures of Adrienne James, which can best be described as "female Indiana Jones - in space" - SYFY

Other notable comic and graphic novel works Medney has helmed include work done in collaboration with bands and music festivals such as the largest Hip Hop Festival in the world Rolling Loud, Grammy award winning musician Shaggy, along with other notable talents such as NGHTMRE, Pegboard Nerds, Riot, and Insomniac's Events.

Morgan Rosenblum is an award winning and best-selling comic book author, best known for his breakthrough fantasy original graphic novel series, Winds of Numa Sera (Dark Horse). Morgan currently works as Managing Editor and Art Director at the iconic Heavy Metal magazine, where he has played a large role in the brand's recent resurgence.  He also co-founded Herø Projects (alongside Heavy Metal CEO Matt Medney), a burgeoning custom comics company, where he presides as the Chief Creative Officer building original comics and story-based content for the likes of Sony, Live Nation, and Disney, to name a few. With other new titles in development and already signed to major publishers, Morgan is quickly establishing himself as a hot commodity creator in the industry.