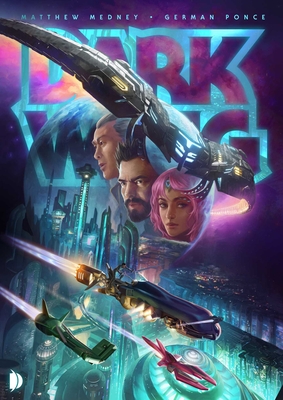 A distinctive generational event. The Dark Wing pays tribute to all space faring science fiction that came before with a fresh, unique take on the genre. A planet fairing ship.

Millennia ago, a doomed civilization did the impossible: saving their
planet from an encroaching black hole by converting it into a giant spacecraft.
Now, the Dark Wing – piloted by Captain Benedict Gunn – shepherds the planet
and its entire race of Quails through space, searching for a new sun.
A product of intense research and wild imagination, Dark Wing is operatic in
every sense of the word: vast, intellectual, and spanning generations. It offers a
prescient glimpse at the engineering, culture, and emotionality of an interstellar
society – much like the one we’re becoming.

Matthew Medney is the CEO of the generational & legendary Heavy Metal Magazine, and co-founded Boutique Storytelling Company, Herø Projects where he also still presides as CEO. Leading the charge at two genre focused brands, Matthew spends most of his time thinking about the unknown.

A graduate of the University Of Massachusetts at Amherst's Isenberg School of Management, Matthew started his career in the live events space, operating as a tour & production manager, traveling across 45 countries producing over 200 shows for concerts such as Coachella, Ultra Music Festival, Electric Daisy Carnival & Lollapalooza.

"A Prolific Writer" (Variety) with the ultimate goal of looking to expand minds and engage readers through high concept Science Fiction, Medney has authored best selling works such as his hard sci-fi novel Beyond Kuiper: The Galactic Star Alliance and the graphic novel Dark Wing. In addition, he has penned multiple comic books including The Red, and his highly anticipated forthcoming work The Adventures of Adrienne James, which can best be described as "female Indiana Jones - in space" - SYFY

Other notable comic and graphic novel works Medney has helmed include work done in collaboration with bands and music festivals such as the largest Hip Hop Festival in the world Rolling Loud, Grammy award winning musician Shaggy, along with other notable talents such as NGHTMRE, Pegboard Nerds, Riot, and Insomniac's Events.