Black Snowflakes Smothering A Torch: How to Talk to Your Veteran - A Primer (Paperback) 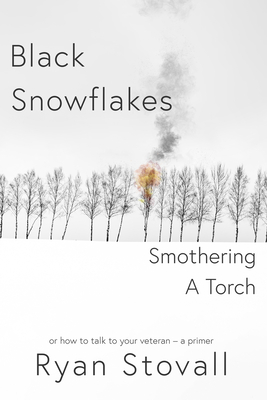 A primer serving to facilitate dialogue between those who have experienced the crushing arms of war and those who have not, at its foundation Black Snowflakes Smothering a Torch presupposes that many issues veterans face when reintegrating come not from the veteran’s traumas but from the hypocrisies inherent to American civilian culture itself. As such Black Snowflakes represents an invaluable starting point, one that will serve as both a reference for civilians seeking to understand and as a voice for veterans hoping to explain.

Ryan Stovall is a former adventurer, world traveler, and Green Beret twice decorated for valor and awarded two Purple Hearts. Since returning from Pakistan in 2016 he has found writing to be a therapeutic outlet for coping with PTSD. His poetry won the 2018 Wright Award from Line of Advance and has appeared in Rosebud, The Cape Rock, Here Comes Everyone, and other journals and anthologies

"To raise the imaginative stakes so that they pierce the rhetorical stakes in America’s recent, literally far-fetched wars takes an emotional determination that if not off-the-charts is pushing very, very hard..." —Baron Wormser, author of Tom o’ Vietnam

"Ryan Stovall's debut collection is both confession and accusation. Joke and sometimes bitter punch line. While the poems set out to educate the lay reader on how to talk to their veteran, they also service cathartic self-excavation." —Graham Barnhart, author of The War Makes Everyone Lonely