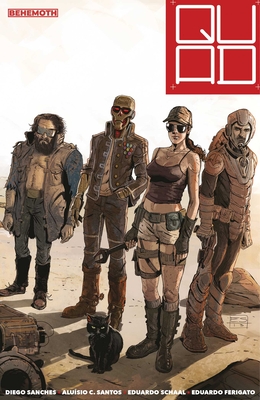 Four writers and artists created a sci-fi and dystopian world that has captured audiences around the world with thousands of copies sold in other languages. This volume collects the first four stories told by those creators.

In the last decades of the 21st century, a Massive Solar Storm hit planet Earth, destroying all technology in its way. Global communications were lost, nuclear reactors collapsed, the climate suffered the worst drastic changes and financial systems were gone. The survivors had to adapt to the harsh new reality. New societies were built over the ruins of those that crumbled. Four generations have passed.

- The mechanic Terah and her black cat Elvis accept a quick and simple repairing job in the middle of nowhere. There's something odd about this job. It's never really simple.

- In the isolated society of the Domecity, robots are responsible for most of the labor necessary for it to run smoothly. When they rebel and attack their human masters, it can only mean one thing: it has been possessed by one of the mysterious viruses from the city's cyberspace. Only the robot law enforcers of the Ghostware Exorcist Division are capable of dealing with this threat, and Trent is the best of them.

- Every day in the life of Eko is the same: wake up, get to work, return to the lodgings, rinse, repeat. That wasn't a problem until he met the Trashmen, a gang of motor-bikers that freely barter and trade their way into the Automaton City. It makes Eko feel that something is wrong, something is missing. His life will never be the same.

- Captain Lucas and his First Mate Daniel are the crew of one of the Explorer Fleets of the Daedalus Space Colony. Returning from a mission, they capture a colonial SOS alert coming from an uncharted sector of the space. They end up stranded on a dangerous and mysterious planet where they'll be challenged by things they never knew existed.