As Figs in Autumn: One Year in a Forever War (Hardcover) 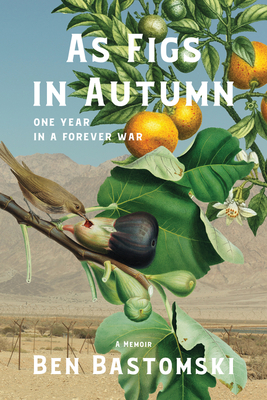 In his final college semester, Ben awakens to read on his computer screen of the death of his classmate and childhood friend Avi. Avi’s death is sudden and senseless, killed by a drunk driver on his way back to his dorm. Here begins Ben’s story of coming to terms with loss and finding his way to adulthood.

In the fall of 2010, with his new degree in Moral Philosophy, Ben boards a plane to Israel to enlist in the Israel Defense Forces (IDF). Though Ben has never held a gun, before the next summer ends, he is a trained sharpshooter. His service takes him from the Negev Desert to the Occupied Territories and Gazan border, all while finding "home" at a southern kibbutz where he is adopted as a brother and son. From Providence, Rhode Island to California and at last to Israel where Ben joins Mahal, the special set of non-Israeli-born Jews who volunteer in the IDF, he finds family where never expected, a place of his own in the Israeli mosaic.

In a memoir that is both coming-of-age story and epic ballad, Bastomski’s lyrically told story is intensely personal and ultimately universal.

Ben Bastomski, a Southern California native and Israel Defense Forces veteran, moved to Santa Monica, CA to practice law after graduating from Harvard Law School in 2015. In the years since, Ben has become an accomplished civil litigator, while pursuing a parallel career as a fashion model with a Los Angeles talent agency. He has recently returned to live in Israel and is now based in Jerusalem. Ben was raised in a Jewish home with a love of furry and feathered animals, creation myths, and the outdoors. Among his most beloved childhood memories were the signings he attended at his favorite local bookstore, Chaucer's Books. As Figs in Autumn is his début book.