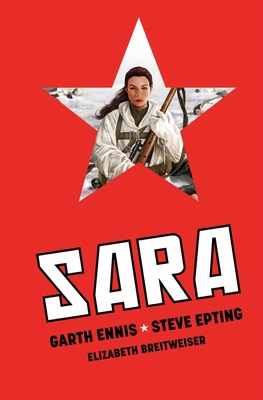 The deluxe hardcover edition of Garth Ennis and Steve Epting's gripping World War II story following a team of female Russian snipers as they beat back the Nazi invaders.

In the cold winter of 1942, Soviet sniper Sara and her comrades fight against Nazi invaders. But as the fighting intensifies, can their squad survive? Inspired by true events.

Garth Ennis is the award-winning writer of Hellblazer, Hitman, Punisher, Preacher, Pride and Joy and War Stories. He is much in demand for his hard-edged, wickedly humorous style.

Steve Epting made his name with Marvel fans with an eminent fifty issue run drawing THE AVENGERS in the 1990’s. He has contributed art for X-FACTOR, THE X-MEN, SUPERMAN, AQUAMAN, FANTASTIC FOUR, and NEW AVENGERS. Along with writer Ed Brubaker, Epting draw a critically-acclaimed run on CAPTAIN AMERICA, co-creating the Winter Soldier, the character from the smash hit movie CAPTAIN AMERICA THE WINTER SOLDIER. Epting recently re-teamed with Brubaker on the smash hit VELVET, and provided the art for the relaunch of BATWOMAN.

Rob Steen has lettered comics for publishers such as Marvel, DC, Dark Horse, Image, Valiant, First Second, and Aftershock. He is also the illustrator of the FLANIMALS series of children’s books written by Ricky Gervais and the Garth Ennis children’s book ERF.

"A heartbreaking character study about what one woman will sacrifice in the name of her country."
— AV Club

"It's one of the best war stories that the comic book creator has put to paper."
— Comicbook.com

"Holy Wow is this a good looking comic."
— The Beat

"One of the finest works of [Garth Ennis’] career."
— Alan Moore (Watchmen, V for Vendetta, The Killing Joke)

"Sara provides a fascinating read into what it means to tell a story set in World War II."
— Comic Watch