Secrets of the Titanic: The Truth About the Tragedy (Hardcover) 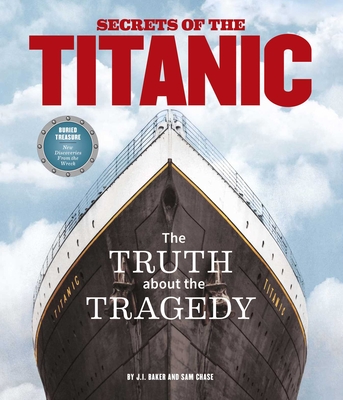 Believe it or not, researchers are still making new discoveries about the Titanic after more than 100 years! This book is the most visual and most up-to-date chronicle of the famous ship's development, voyage and ultimate tragedy, illustrated with numerous photos and drawings.

More than one hundred years after the “unsinkable” Titanic sunk after colliding with an iceberg in the North Atlantic, the tragedy continues to haunt us. That’s partly thanks to the movies—notably James Cameron’s 1997 blockbuster, Titanic—that have turned the story into a sort of modern myth. In fact, when it comes to the events of April 15, 1912, untangling fact from fiction has become increasingly difficult. Was the captain drunk? Was the ship going too fast? Did the crew ignore ice warnings? Do the ghosts of the wreck's 1,500-plus victims still haunt the frigid sea? These and other questions are explored—and often answered—here. You will experience the ship’s fateful final day and enter into the glittering lives of such celebrated passengers as John Jacob Astor and Benjamin Guggenheim. You’ll also learn the fascinating stories of its lesser-known travelers: the man who kidnapped his two sons; the movie star who starred in a film about the disaster, and many other unsung souls whose lives were lost—or changed forever—when the ship went down. In the end, you’ll probably agree that (movie myths aside) the truth is much stranger than fiction.

J.I. Baker is a journalist and screenwriter who has worked on the editorial staffs of Time Out New York, Us, Glamour and Condé Nast Traveler.  He is also the author of The Empty Glass, a novel about conspiracies surrounding the death of Marilyn Monroe. When researching Secrets of the Titanic, he was surprised to discover how much he actually did not know about the infamous ship. He lives with his tabby, Tommy, in St. Paul, Minnesota.