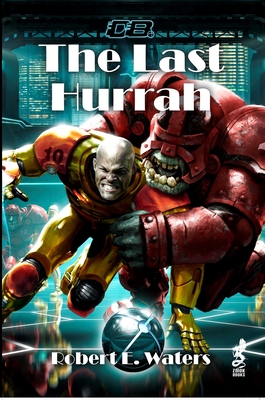 Fantasy sports novel where players need to survive the game

Set in Mantic Games’ Warpath universe and based on its sports tabletop game Dreadball.

Ex Corporation Striker Leeland Weiss teeters on the horns of a dilemma: return to the sport that once defined his life, or continue to drown his sorrows in booze, babes, and back alleys.

The choice is not as simple as it may seem, for Weiss cannot shake the crippling guilt that plagues him day after day. But a new opportunity has arisen, and the lure of the spotlight, the drama, the fans, and the money, may bring him out of the shadows.

Weiss must now cobble together a team of nobodies and coach them to glory in a 32-team tournament that promises big rewards for the winner. Along the way, he will face a battalion of dangers: death, injury, Digby corruption, corporate greed, familial hatreds, bribery, rebellion, and even the limitations of his own abilities as a coach.

Can this former Dreadball star rise to the occasion, or will this be his last hurrah?

For the past 20 years, Robert E Waters has served in the gaming industry, first as a Managing Editor at The Avalon Hill Game Company, and then as a producer, designer, and writer for several computer game studios. He is currently a designer at Breakaway LTD.  His first book for Zmok Publishing was, "The Wayward Eight" followed by several short stories and "The Cross of Saint St. Boniface"

Robert has been publishing fiction professionally since 2003, with his first sale to Weird Tales, “The Assassin’s Retirement Party.” Since then, he has sold over 25 stories to various online and print magazines and anthologies, including stories to Padwolf Publishing, The Black Library (Games Workshop), Dragon Moon Press, Marietta Publishing, Dark Quest Books, Mundania Press, Nth Degree/Nth Zine, Cloud Imperium Games, and the online magazine The Grantville Gazette, which publishes stories set in Baen Book’s best-selling alternate history series, 1632/Ring of Fire. Most recently, Robert has put his editorial skills to task by co-editing the anthology Fantastic Futures 13 (Padwolf Publishing) which features science fiction and fantasy stories about Earth’s potential future. From time to time, he also writes short fiction reviews for Tangent Online. He also served for seven years as an assistant editor for Weird Tales.

Robert is currently living in Baltimore, Maryland with his wife Beth, their son Jason, their cat Buzz, and a menagerie of tropical fish who like to play among the ruins of a sunken Spanish Galleon. His website can be found at www.roberternestwaters.com.