Me & Other Writing (Paperback) 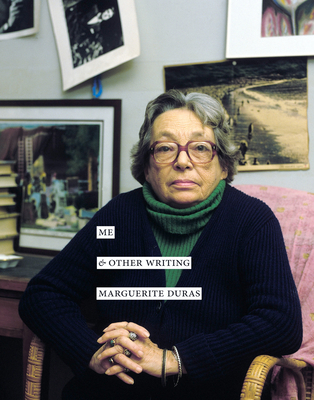 A career-spanning collection of Marguerite Duras’s genre-bending essays that Kirkus calls “a luminous, erudite exploration of the self and art.”

In her nonfiction as well as her fiction, Marguerite Duras’s curiosity was endless, her intellect voracious. Within a single essay she might roam from Flaubert to the “scattering of desire” to the Holocaust; within the body of her essays overall, style is always evolving, subject matter shifting, as her mind pushes beyond the obvious toward ever-original ground.

Me & Other Writing is a guidebook to the extraordinary breadth of Duras’s nonfiction. From the stunning one-page “Me” to the sprawling 70-page “Summer 80,” there is not a piece in this collection that can be easily categorized. These are essayistic works written for their times but too virtuosic to be relegated to history, works of commentary or recollection or reportage that are also, unmistakably, works of art.

Marguerite Duras was one of France’s most important and prolific writers. Born Marguerite Donnadieu in 1914 in what was then French Indochina, she went to Paris in 1931 to study at the Sorbonne. During WWII she was active in the Resistance, and in 1945 she joined the Communist Party. Duras wrote many novels, plays, films, and essays during her lifetime. She is perhaps best known for her internationally bestselling novel The Lover, which won the Prix Goncourt in 1984. She died in Paris in 1996.

Olivia Baes is a trilingual Franco-American writer and actress. She holds a Bachelor’s Degree in Comparative Literature and a Master of the Arts in Cultural Translation from the American University of Paris.

Emma Ramadan is a literary translator based in Providence, RI, where she co-owns Riffraff, a bookstore and bar. She is the recipient of an NEA fellowship, a PEN/Heim grant, and a Fulbright for her translation work. Her translations include Anne Garréta’s Sphinx and Not One Day, Virginie Despentes’s Pretty Things, Ahmed Bouanani’s The Shutters, and Marcus Malte’s The Boy.

Dan Gunn is a novelist, critic, and translator, as well as being one of the editors of the four-volume Letters of Samuel Beckett and editor of the Cahiers Series. He is Distinguished Professor of Comparative Literature & English at the American University of Paris where he directs the Center for Writers & Translators. He was designated in 2017 as editor of Muriel Spark’s letters.

“This little book of goodies starts off with a bang. . . . And the brief translators’ Afterword to this collection is a piece of writing on its own, a tender précis on the art, and dilemmas, of rendering Duras and her ‘écriture courant’ in English.” —Rachel Kushner, Artforum

“Of course many of us have read L’Amant, and many of us are already fans of the kind of autofiction that Duras helped popularize, but despite that I was unprepared for how deeply affecting a reading experience Me & Other Writing would be. Duras is not for an age, as they say, but for all time, and the pieces collected lovingly and thoughtfully into this volume will stay with me forever.” —Kyle Williams, Chicago Review of Books

“The work in Me & Other Writing varies from essays to journalism to the beginnings of the autofiction she would make famous with L’Amant, for which she won the Prix Goncourt in 1992, but they are completely alike in their didacticism, humor, pessimism, and intelligence. Her voice is so strong that she dissolves boundaries to create a single oeuvre, a composite but unified body of work.” —Natasha Boyd, Los Angeles Review of Books

“Baes and Ramadan capture the liberty and madness, the very breath of Duras’s thought: moving seamlessly between ideas, the measured precise inhales and exhales of an opera singer. They make distant events, foreign ideas, and even repulsive thoughts belong to the reader herself. . . . Reading Me & Other Writing is a powerful experience: I’ve been compelled to tell people about it and to share her ideas and nearly aphoristic paragraphs with my own writing students.” —Allison Grimaldi-Donahue, Words without Borders

“As Duras tells us about the Moscow Olympics, shipyard strikes in Gdańsk, her hopes for a proletarian revolution, and her despair at the 'misfortune of mankind,' she weaves in a tender narrative about a small boy and the adolescent girl who looks after him. This is entirely fictional—a characteristic ploy from a writer who believed that understanding suffering was an act of the imagination.” —The New Yorker

“Duras's writings span a host of styles and emotional tones, but Anglophone readers have, to date, not been exposed to nearly as much of her nonfiction. That's all about to change with this expansive collection of her nonfiction, offering readers a way to engage with a new, and equally impressive, side of Duras's bibliography.” —Vol. 1 Brooklyn

“This is writing that demands, and provides, its own spotlight—not only through its incandescent intelligence (as in Duras's reading of the violence enacted not by, but upon, Simone Deschamps in 'Horror at Choisy-le-Roi'), but also through its refusal of linear exposition, the way it careens from one idea to another or dashes the reader's expectation of authorly pronouncements by offering instead a lyrical image (Olivia Baes and Emma Ramadan reflect on the challenges of translating this opacity in an excellent note in the book's final pages).” —Heather Cleary, Literary Hub

“Essays, aphorisms and other eclectic nonfiction from one of the 20th century's greatest thinkers and prose stylists.” —The New York Times Book Review

“While reading Marguerite Duras, it can be hard to tell if you are pressing your hands to her chest or if she is pressing her hands to yours. Has she mined your deepest feelings or have you caught her heart's fever? Her nonfiction, written in the same blood and seawater as her fiction, produces the same sensation.” —Julia Berick, The Paris Review Daily