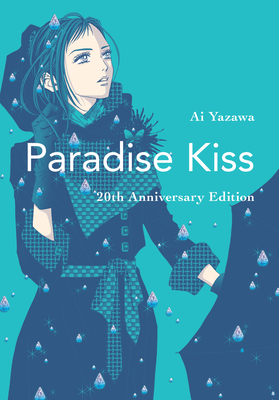 One of the most popular comic artists in the world, Ai Yazawa, returns with a 20th anniversay edition of the fashion-inspired comic that made her an international sensation, Paradise Kiss.
This new edtion celebrates 20 years since Paradise Kiss began serialization in Japan and combines the original 3 volume release into 1 beautiful package.

High fashion and hot drama come together in Paradise Kiss. One of the manga to launch the manga boom globally Paradise Kiss combined stunning design work and YA themed naratives that made it a multimillion unit seller worldwide.

From 1999 to 2009 no shojo manga (girls comics) author in Japan sold more books than Ai Yazawa. Raised in Japan's Hyogo Prefecture, Yazawa grew up with ambitions to become a fashion designer. As a youth enrolled in the Osaka Mode Academy, one of Japan's most competitive fashion schools.

In 1985 Yazawa made her debut in the pages of the monthly girl's anthology RIBON with the title 15th Year. While her tales focused on young love, but what captivated readers was her stunning sense of design. Since then she has gone to pen eleven more titles and has sold more than 100,000,000 books in Japan alone. Her title NANA was an international sensation, spinning off multiple movies, animated TV series, fashion lines and even inspiring talents such as Gwen Stephani. Paradise Kiss has been translated into 10 languages and is considered her defining work.