Rip It Up: The Specialty Records Story (RPM Series) (Paperback) 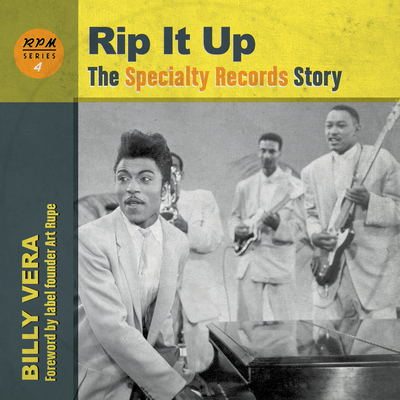 Launched by legendary music industry executive Art Rupe in the mid-1940s, the Los Angeles-based Specialty Records emerged as one of the most important independent labels for African-American music in the twentieth century. Recognizing that competing with major record companies was a losing battle, Rupe headed to Central Avenue, the center of L.A.’s black community, where he spent $200 on what were then known as “race records.” He carefully analyzed each, developing his own formula for a
successful venture.

Soon, Specialty was scoring R&B hits with artists such as Roy Milton, Camille Howard, Jimmy and Joe Liggins, and Percy Mayfield. Drawn to the music of New Orleans, Rupe went on to sign Lloyd Price, who topped the charts with “Lawdy Miss Clawdy.” It was through Price that Specialty acquired its best-known artist, Little Richard. After “Tutti Frutti” exploded in 1955, Richard and the label scored a string of successes with “Long Tall Sally,” “Lucille,” “Keep A Knockin’,” “Good Golly Miss Molly,” and more.

In addition to R&B and the emerging sounds of rock ’n’ roll, Rupe was particularly drawn to the sounds of the church. Black gospel music was an essential element of his company, with a roster that included stars of the genre, such as Sam Cooke’s Soul Stirrers, Sister Wynona Carr, Brother Joe May, Alex Bradford and the Bradford Specials, and others.

Art Rupe is a pioneering music industry executive and record producer. He launched Specialty Records, noted for its rhythm and blues, blues, gospel, and early rock and roll music recordings, in Los Angeles in 1946. Billy Vera is a singer, songwriter, actor, record producer, and music historian who wrote and recorded “At This Moment,” which was a #1 hit in 1987. He won a 2013 Grammy award for his notes for the Ray Charles Box set, Singular Genius: The Complete ABC Singles, and he has a star on the Hollywood Walk of Fame. Vera’s other books include his memoir, Harlem to Hollywood; Vintage Neon: Los Angeles, 1979; and his forthcoming novel, A Dollop of Toothpaste.