Losing (to Win): How Incentivized Losing Undermines the Integrity of Our Major Professional Sports Leagues (Paperback) 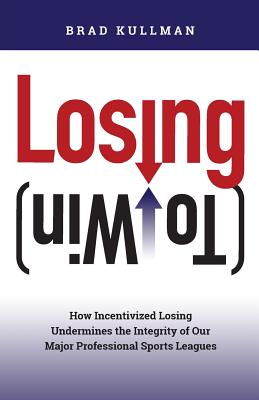 Our major professional sports leagues are in a state of crisis and everyone talks about it, but nobody is talking about it Brad Kullman combines his experience as a high-ranking major league baseball executive with extensive study of human behavior and performance, as he frames the conversation with this compelling investigative expos that asks a critical question: What is the difference between trying to lose and not trying to win?

Everyone who follows major league sports knows that losing teams can benefit by losing more. We talk about it freely, as if it is an inherent and inseparable part of the major league game. Yet nobody is talking about how the encouragement of extreme losing provided by a backward system is damaging the integrity of play. Kullman presents undeniable evidence based on numerous examples in which teams from each of the "Big Four" major leagues (NFL, MLB, NBA, NHL) purposely did not try to win regular season games. Teams employ this "losing" strategy in hopes of improving the team's long-term fortunes by "winning" a more advantageous position in the conceptually flawed "reverse standings" amateur draft. While league officials, team owners, pundits, and fans collectively look the other way and pretend it is not doing harm, Kullman explores how the issue of losing (to win) is undermining the integrity of play to the point that we should all be up in arms

"Tanking" is the art of purposely losing while giving the appearance of "trying" to win. Kullman incorporates his experience in a major league baseball front office along with his unique perspective of human understanding to examine how tanking has quietly reached epidemic levels in today's game. Most importantly, Kullman introduces an ingenious solution that can be quickly and easily implemented, which will bring integrity back to the spirit of the game and put the "compete" back in competition