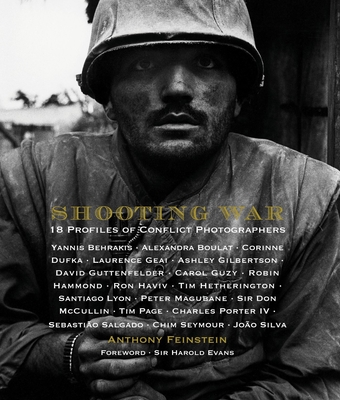 Conflict photographers are visual historians, bearing witness to stories that must be told. The images they produce seize our attention, and moved by what we see, troubling questions come to mind. What has become of these victims of war whose plight has been so memorably captured on camera? How did human behavior turn so dark? Shooting War builds on this narrative by asking a different set of questions that to date has received little, if any, attention. What of the person taking the photograph? What might they have experienced? Neuropsychiatrist Anthony Feinstein provides the answers in a series of essays, one each for 18 of the world's preeminent conflict photographers. Complementing each essay is a single, iconic photograph around which the text is built. The essays, derived from face-to-face interviews with the photojournalists, relatives, and close friends, give new and revealing insights into those factors, professional and psychological, that motivate photographers to enter zones of conflict repeatedly and the consequences that come from exposure to grave danger. What emerges from these interviews and analyses is a different, unique appreciation of the world of the war and conflict photographers. With a definitive foreword by Sir Harold Evans, himself a world-renowned commentator on conflict and photography, this ground-breaking book will stir interest in the essential work of the men and women who, armed with only a camera, venture into the world's most dangerous places.

Anthony Feinstein is a professor of Psychiatry at the University of Toronto and Sunnybrook Health Sciences Centre, a Guggenheim Fellow, and a Peabody winner for his documentary Under Fire: Journalists in Combat. He has published a series of seminal studies exploring the psychological effects of conflict on journalists covering the Balkans, Iraq, Syria, Kenya, Iran, and the refugee crisis in Europe. He lives in Toronto, Canada. Sir Harold Evans is a British-born journalist and bestselling author of The American Century. He was knighted by Queen Elizabeth in 2004 and is the recipient of an International Center of Photography Lifetime Achievement Award, two honors among many he has garnered over the course of a celebrated career. He lives in New York City and East Hampton, New York.